•Owalo's move, however, comes amid speculations he will be contesting in the forthcoming by-election for Kibra constituency after the death of former MP Ken Okoth.

• He said that his resignation should be followed by an instant removal of his name from the ODM Partry Membership Register. 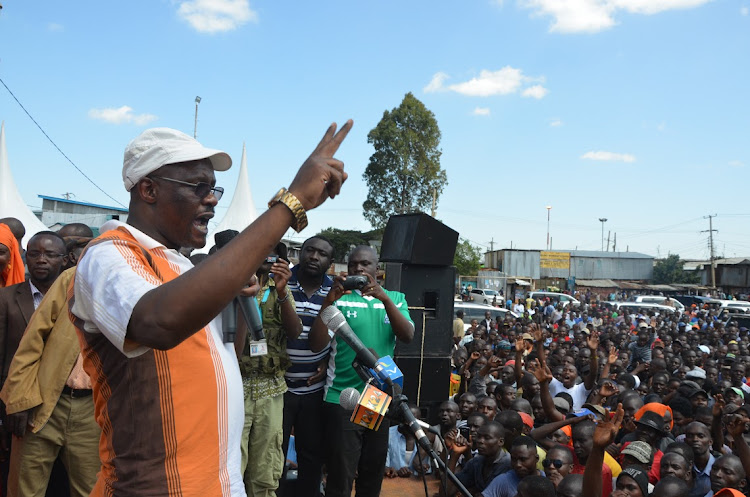 Eliud Owalo during a past rally in Kibra.
Image: FILE

Eliud Owalo has officially resigned as a member of the Orange Democratic Movement.

The Nairobi-based management consultant formerly served as ODM's strategist and Raila's aide in the 2013 General Elections.

He was also in NASA's secretariat in the run-up to the 2017 election.

In a letter to ODM's Secretary General and the Registrar of Political Parties dated Tuesday, Owalo said that his resignation should be followed by an instant removal of his name from the ODM Partry Membership Register.

"It is with great regret that I write to inform you that I have with immediate effect relinquished my membership of the ODM Party," read part of his letter.

"My resignation is informed by the fact that my political ideology, convictions and belief no longer has convergence or depict and congruence and common denominator with that of the ODM party, its value orientation and practices."

Owalo said, as a result, there is no 'iota of enthusiasm' remaining in him to warrant his continued stay in the party.

His move, however, comes amid speculations he will be contesting in the forthcoming by-election for the Kibra constituency after the death of former MP Ken Okoth.

Owalo also unsuccessfully contested for the same position in the 2013 elections but his ambition was cut short after he lost in the nominations.

Raila Odinga's former aide Eliud Owalo is on a war path with the family of the ODM leader, which he has accused ofplanning to rig him out of a ...
News
5 years ago

There was tension at the Kibra constituency on Sunday after MP aspirant Eliud Owalo found his name missing in ODM's voter register.Owalo was told ...
News
5 years ago

Owalo blames Raila for Kibra loss, will not vie for MP seat

Eliud Owalo has blamed NASA leader Raila Odinga for his loss in the KIbra MP nominations and accused him of having "parochial political interests" ...
News
5 years ago
Post a comment
WATCH: The latest videos from the Star
by PATRICK VIDIJA Investigative Journalist
News
13 August 2019 - 11:44
Read The E-Paper