•They say policies on SGR and Mombasa port are sinking the local people to poverty, exposing to the allures of crime and drugs.

•The want local resident given equal consideration as their livelihoods have been affected. 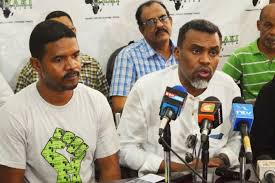 A human rights lobby has blamed the rise of violent gangs on the government.

Haki Africa executive director Hussein Khalid said government policies on the SGR and the port of Mombasa have left many youths idle, jobless, poor and hopeless.

He was reacting the violent attacks on Monday night in Mombasa.

The coastal city woke up to the news that a group known as Wakali Kwanza had indiscriminately attacked an injured people at Naivas Centre and Lake View in Bamburi.

Khalid said although youth in the region would not engage in crime, the state was to blame for policies that deprive them of their livelihoods.

"The port has for a long time been the bloodstream for the economy of Mombasa and the region. But now the government has made all the activities transferred to Nairobi, making no direct or indirect businesses and jobs available for the people here," he said.

"The SGR is also monopolising the cargo handling here. The trucks are off the roads, meaning that youth who would work as loaders, among other jobs, have nothing to do. What do you expect? They'll get to drugs and crime," Khalid added.

A number of clearing and forwarding agents closed after a container terminal was established in Embakasi. Even goods destined for Mombasa have to be processed in Nairobi.

“Nowadays driving from Mombasa to Nairobi takes two to three hours less because there are no trucks on the road. Their work was taken up by the train. This is sad as locals are choking in poverty,” Khalid said.

This is also the view of Pwani Social Justice Centre and local MPs, who on Monday condemned the directive by the government that SGR is the sole mover of cargo at the port.

Legislators Badi Twalib and Khatib Mwashetani said the policies are slowly but consistently eating away the opportunities for the local people, turning the once vibrant town into a ghost city.

They demanded that the government stops "preferential treatment of the SGR but make it compete with other options available".

With no more truck business and related commercial activities like small lodgings, hotels and other service sectors, the gates are wide open for criminal gangs and drugs to wreak havoc, they said.

Uhuru spoke during the send off of Dorka Owino, mother to governor Nyong’o.
Counties
3 years ago
by GORDON OSEN News Journalist
News
07 August 2019 - 00:00