MP kicked out of Parliament after walking in with baby

The Speaker ordered the Serjeant-at-arms to remove her from the chambers.

• The House was debating the Kenya-Somalia Maritime Border Dispute Resolution before Zulekha walked in with her baby.

• Majority leader Aden Duale was forced to cut his submission, saying Zulekha was out of order. 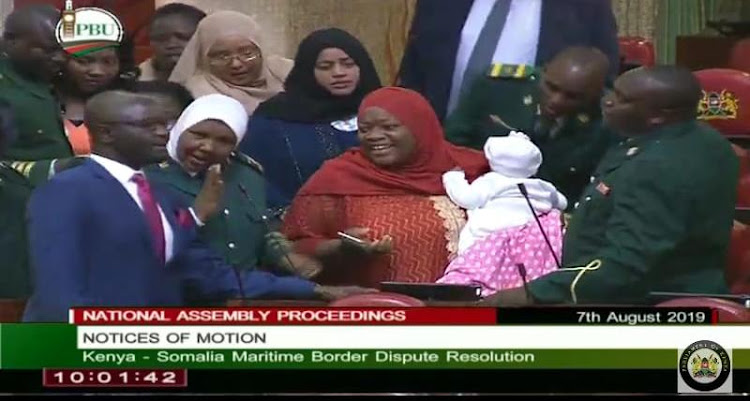 A screen grab showing Kwale Woman Representative Zulekha Hassan being led out of the House chambers by the sergeant-at-arms after she walked in chamber with a baby.
Image: COURTESY

Proceedings at the National Assembly was on Wednesday morning brought to a stand still for 15 minutes after one of the MPs brought her baby to the floor of the House.

Kwale Woman Representative Zulekha Hassan walked into the chamber with a baby and was not ready to walk out until she was kicked out by Serjeant-at-arms.

The Speaker ordered the Serjeant-at-arms to remove her from the chambers, terming her move as unprecedented.

The House was debating the Kenya-Somalia Maritime Border Dispute Resolution before Zulekha walked in with her baby.

Majority Leader Aden Duale was forced to cut his submission, saying Zulekha was out of order.

Duale said the point of order was serious and her action was gross misconduct.

Homa Bay town MP Peter Kaluma defended her action, saying that she should not be separated with her new born baby.

"If you are a Member of Parliament who is breastfeeding, in the best interest of that child, the child cannot be separated from you when you are in the course of your duty in the Assembly," Kaluma said.

Kaluma said it was not in order to separate the child from the arms of her mother.

He also challenged the Parliament to create a place for breastfeeding.

Duale said Zulekha's action has never happened since independence, adding that it was an abuse of the House.

"That member must be cited for gross misconduct.  We must protect the dignity of the House," Duale said.

He also said the House cannot proceed with its business of the day with 349 and a half members.

The Woman Rep was taken out together with Alego Usoga MP Samuel Atandi who tried to protect her,

Post a comment
WATCH: The latest videos from the Star
by KEVIN CHERUIYOT
News
07 August 2019 - 10:52
Read The E-Paper