He says one suspect was a witness in the exchange, didn't know they would be used for crime

• Motorbikes were recovered in the forest by search parties 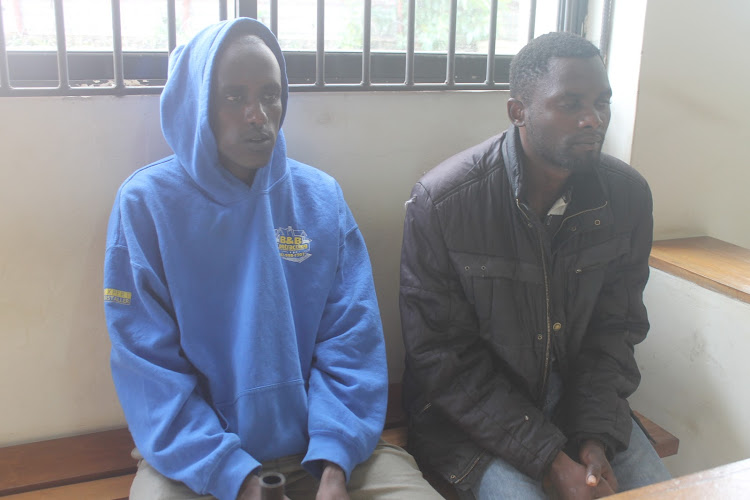 Romano is still at large but witnesses recounted before Malindi chief magistrate Julie Oseko how the incident took place on November 20 last year.

In the case against Moses Luwali and Abdulla Gababa Wario, the court heard that Luwali was a witness in the sale of two motorbikes used in the abduction.

One of the witnesses told the court he sold his motorbikes not knowing that they would be used in criminal activities.

The witness revealed that he sold them to Said Adan Abdi at Sh40,000 and Sh35,000 and produced sale agreements.

The sale agreements showed Luwali as a witness together with Abdi Aziz Adan and Harith Adan.

The two motorcycles believed to have been used by the kidnappers to travel after the incident were recovered by police in the forest.

Chakama chief Macdonald Ngowa told the court he was with Romano on the day she was abducted. "She left to watch the evening news," he said.

Two minutes later, he said, he heard a loud bang followed by several gunshots. "People were very scared so I told them to lie down for their safety as the shooting went on for five minutes," he said.

Ngowa told the court Romano cried out his name for help as the kidnappers dragged her away towards the River Galana on foot.

He called deputy county commissioner John Kamau and informed him of the incident and later informed the chief inspector at Langobaya, the court heard.

Langobaya Administration Police officers arrived at the trading centre two hours after the kidnapping. "It was too late to pursue the attackers who had already crossed the river."

Ngowa said he later called an ambulance to carry four children and a woman who sustained gunshots wounds.

He told the court that police reinforcement from Malindi arrived at the scene at 11pm but did not cross the river as they opted to drive back and use the Sabaki route across the bridge to Marafa and Matolani villages where the kidnappers had fled to.

"The following morning, three local youths and I crossed the river and started following up foot tracks and motorcycle prints," he said.

A Kenya Defense Forces helicopter later hovered over them and landed then KDF soldiers informed them that they were also in the search mission, he said.

He found another team of KWS rangers in a vehicle searching for the kidnappers. The chief said they joined the KWS team and after driving for 30km, they found a motorcycle stuck in the mud in Kisiki sublocation.

The rangers said they had to go back as they were hungry and tired but two of the youths remained, Ngowa said.

The other motorcycle was found in a bush by the KDF soldiers.

Luwali and Wario were charged that on November 20, last year at Chakama in Malindi subcounty of Kilifi county, they kidnapped Romano in order to cause grievous harm, slavery and demand ransom from the Italian embassy as an explicit condition for release.

The two were also charged with conspiracy to effect unlawful purpose as they organised a meeting to kidnap Romano.

They were also charged with supporting Abdi to kidnap Romano. Police placed a Sh1 million bounty for Abdi.

The court had released them on a Sh3 million bond with two sureties of a similar amount.

However, only Luwali managed to pay and his co-accused is in remand at the Malindi GK Prison.

Defence lawyer Tonia Mwania asked the court to adjust the bond terms to give her client an opportunity to pay.

The magistrate reduced the sureties to one and set the hearing for August 21.