• In statements forwarded by the prosecution lawyers before the court on Monday, the Akasha’s are said to have confessed they trafficked weapons with members of the terrorist organization al Shabaab.

• They admitted to have protected their lucrative drug business with violence, murder, and related threats, doing whatever was necessary to advance the criminal empire they inherited from their father after he was murdered in 2000. 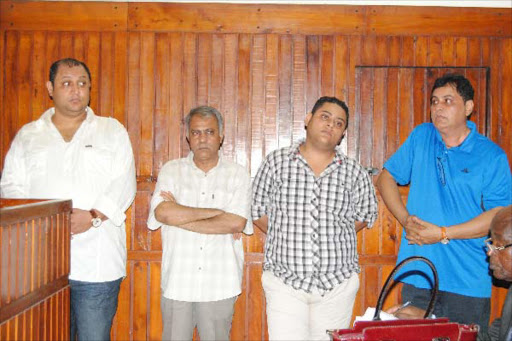 The Akasha drug gang's brutal and murderous methods, as well as their links with  al Shabaab have been laid bare in a court in the US.

The Akashas confessed they bought guns and grenades from Somalia which were then used to intimidate and kill rival gangs.

Brothers Ibrahim and Baktash Akasha, according to the prosecution, each described to Vicky Goswami (their trusted accomplice and now a prosecution witness) how Ibrahim made trips to the Kenya-Somalia border to buy weapons.

The brothers would show Goswami the stockpile machine guns and grenades hidden in Baktash’s home in Mombasa.

Goswami told the court Baktash used an Italian broker to acquire the arms, some of which were to be sold to cargo ship crew in Mombasa.

The Akashas admitted they protected their drug business with violence, murder, and intimidation. They did whatever was necessary to advance the criminal empire. They inherited the trade from their father Ibrahim who was shot dead in Amsterdam in 2000.

For decades, the Akashas run an international drug business of massive proportions, distributing large quantities of Mandrax, cocaine, hashish, heroin, and ephedrine (a methamphetamine precursor), among other substances, to locations all over the world.

In 2014, as part of a sting operation by the Drug Enforcement Administration (the “DEA”), the Akashas were given the opportunity to import mass quantities of heroin and methamphetamine into the United States. They jumped at the chance.

“Ultimately, the Akashas supplied confidential sources working at the direction of the DEA with 99 kilogrammes of heroin and two kilos of methamphetamine,” read the report.

“At the time of their arrest, the Akashas had another 500kg of heroin en route from the Afghanistan-Pakistan region toward Kenya for intended distribution in the United States,” the court papers reveal.

The report indicated that while the Akashas pleaded guilty to their role in the drug importation conspiracy, they have denied their participation in acts of brutal violence, and sought to minimise the extent of their historical drug operations.

The prosecution concluded that the Akashas used machine guns to protect their Mombasa bases.

At the time of their arrest, the Akashas had another 500kg of heroin en route from the Afghanistan-Pakistan region toward Kenya for intended distribution in the United States

Baktash also typically travelled with at least one armed guard and carried Baktash’s handgun in a bag.

Ibrahim likewise was regularly armed with a 9mm handgun.

At the time of Baktash’s arrest, his residence was searched, and the police and FBI recovered, among other things, a 9mm pistol and over 50 bullets,  and a tactical shotgun and 45 cartridges.

The Akashas threatened and eventually kidnapped and assaulted David Armstrong who had been their drug trafficking allay after a business row.

“Soon after, Livondo confronted Baktash at a shopping mall, and the two began to fight. Ibrahim intervened, drew his gun, and threatened to kill Livondo,” read part of the report.

The sight of Ibrahim’s gun caused panic in the shopping mall, and so Baktash, Ibrahim, Goswami, and Baktash’s bodyguard quickly fled.

Before heading to the police station to ensure—with bribes—that there was no fallout from the incident, Baktash, Ibrahim, and Baktash’s bodyguard stashed their guns with Goswami but later retrieved the weapons.

Geoffrey Berman, the prosecutor, told the court on Friday the Akashas armed altercation with Livondo fueled the dispute with Armstrong.

In the days following the armed confrontation with Livondo, Pinky (another drug dealer) called Baktash and defended Armstrong and Livondo.

Before heading to the police station to ensure—with bribes—that there was no fallout from the incident, Baktash, Ibrahim, and Baktash’s bodyguard stashed their guns with Goswami but later retrieved the weapons.

Geoffrey Berman, the prosecutor, told the court on Friday the Akashas armed altercation with Livondo fueled the dispute with Armstrong.

Baktash and Goswami exchanged threats with Pinky on the phone. Immediately following the call, Baktash, Ibrahim, and Goswami discussed what to do in response to Pinky’s threats and Armstrong’s efforts to scare them.

“All three agreed that Pinky needed to be killed. Baktash, Ibrahim, and Goswami decided that killing Pinky would have the benefit of not only stopping Armstrong but also sending a message to the South African drug market that the Akashas were serious traffickers who would not tolerate threats,” the prosecution said.

The prosecution further revealed that Baktash’s violent episodes were not limited to his attacks on other drug traffickers.

Baktash was regularly violent toward his family as well.

Goswami witnessed Baktash, for example, tie his teenage son to a tree, beat him, and brand him with a burning metal rod.

“The son was hospitalized for his injuries but survived. Baktash’s former wife was not so lucky. Goswami was told by both Ibrahim and Baktash’s current wife that Baktash killed his former wife, and Goswami witnessed a dispute during which Ibrahim confronted Baktash about this murder (Baktash did not respond),’ the court heard.

Based on the testimony at the Hearing and the evidence attached to the submission, the prosecution said the Court should reject the Akashas’ efforts to minimize their conduct and mislead the Court.

“Following the Hearing, the Court should overrule Ibrahim’s objections to the PSR and schedule a prompt date for Ibrahim’s sentencing. The Court should further reject Baktash’s denial of his involvement in Pinky’s murder and should consider the full extent of Baktash’s historical drug trafficking and violence,” the prosecution said.

According to the prosecution, to the extent the Court is prepared to proceed to sentencing Baktash on July 26, 2019, the Court should impose a sentence of life imprisonment for all of the reasons set out in their report.

Akasha brothers to be sentenced today and tomorrow

Baktash will be sentenced on Thursday and Ibrahim on Friday.
Counties
3 years ago