• He was diagnosed with colorectal cancer in 2018. 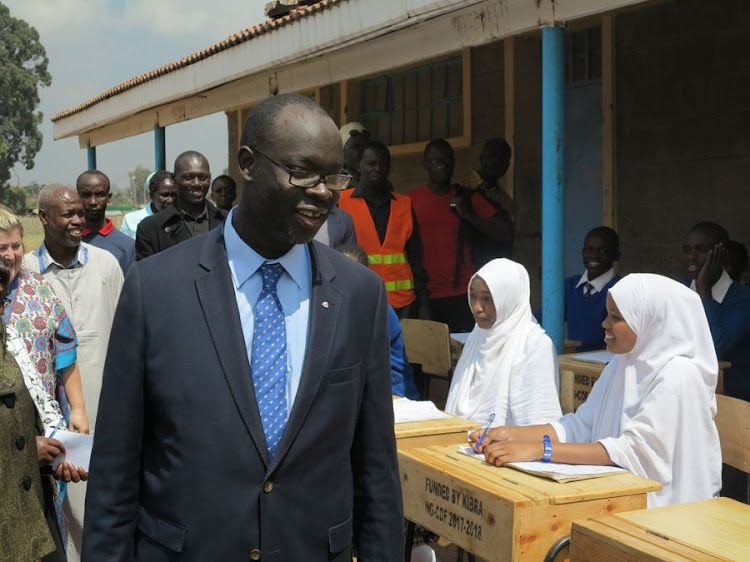 The Late Ken Okoth at Kibera high school on September 14, 2018 when he presented desk procured through the Kibra Constituency Development Fund.
Image: FILE

"Build a school, close a jail.", a  quote by Victor Hugo was something that Kibra MP Kenneth Odhiambo Okoth said often.

And true to these words, Okoth, who succumbed to cancer on Friday, worked to ensure that his constituents had better schools.

On May 7, while seeking treatment abroad, Okoth took Twitter by storm when he posted photos of a new school he was building in Kibra through CDF.

An overwhelming 64 per cent voted that it be called The Kibra High School.

And that was Okoth who became Kibra first MP in 2013 when the area was hived off from Langata Constituency in the last boundaries review.

"Access to secondary school education is critical. For the majority of families in Kibera, footing the cost of boarding schools for their boys and girls is simply unaffordable. We, therefore, must provide quality day-school options within walking distance. We now have the opportunity to build two new secondary schools before 2017," Okoth said upon his election in 2013.

Every day, Okoth would share with his followers the many projects that he was undertaking in Kibra. 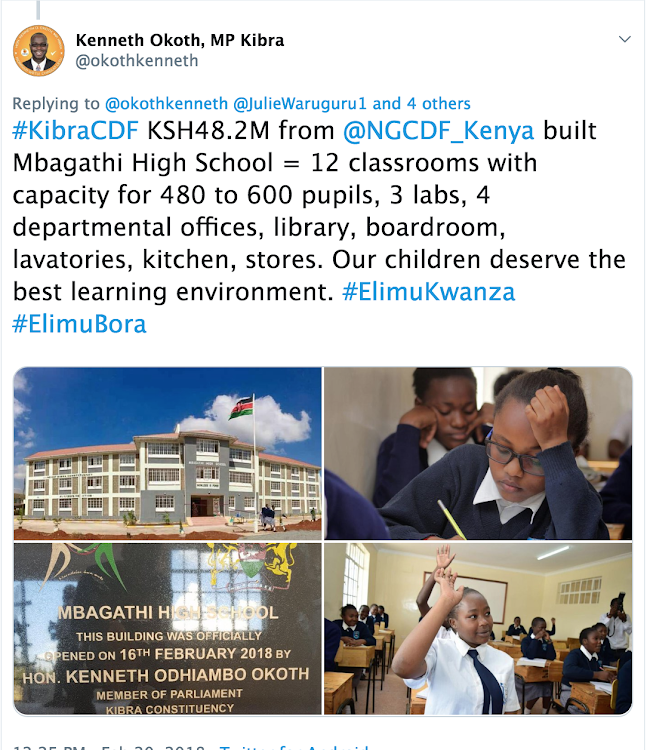 In February, he drew praise from Kenyan after he unveiled Mbagathi High School which was built at a cost of Sh48.2 million through CDF.

Okoth was serving his second terms as MP and was celebrated for his work to improve the lives of Kibra residents.

Born in 1978 and raised in Kibra's Kisumu Dogo area, Okoth referred to himself as an educator and humanist.

He, together with his five siblings, was raised by a single mother. Okoth was the fourth-born.

He went to Olympic Primary school and scored 613/700 in his KCPE examination, then joined Starehe Boys’ Centre.

The Starehe community was hoping to host him this weekend as it marks its 60th anniversary.

He pursued his undergraduate degree at St Lawrence University, USA. He studied German and European Studies.

He held a Master's degree in International Relations degree from Georgetown University.

Before his political life, the legislator is said to have been a watchman at the Maendeleo ya Wanawake House premises. He then volunteered at the Nation and at one time was a newspaper vendor.

Okoth rose to the position of MP and founder of Kibera Foundation.

In 2018, Okoth was diagnosed with Stage 4 colorectal cancer. He put on a brave face as he fought the illness and assured Kenyans he would win the battle.

In a previous interview with Sunday Nation, Okoth said he was misdiagnosed before discovering he had cancer.

He had presented symptoms of ulcers, bacterial infections and that was what he was being treated for.

Okoth was put on drugs to manage stress, a situation he said made him believe he was battling abdominal pain and weight loss.

It, however, turned out that he was being treated for the wrong disease and his doctor finally asked him to take an advanced scan.

“The fear of the unknown that accompanies a cancer diagnosis is immense. Cancer changes your life completely,” he said.

Okoth was then put on vigorous treatment that involved combined radio and chemotherapy to avert the impending risk of organ failure.

Though he responded well, that was just the beginning of his long-term treatment.

“I will be using chemotherapy tablets that I can take every morning. Because my disease was discovered at a very advanced stage; it cannot be cured. It can only be managed,” he said in the interview.

He had been admitted at Nairobi Hospital's ICU on Thursday after developing organ failure..

Post a comment
WATCH: The latest videos from the Star
by OLIVER MATHENGE and PATRICK VIDIJA
News
26 July 2019 - 18:04
Read The E-Paper