• They will only keep ankle boots, black beret, jungle belt and jungle trouser. 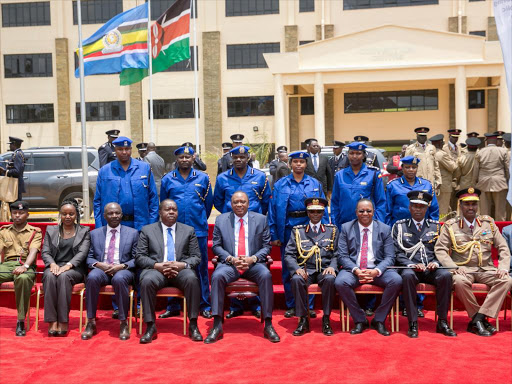 About 23, 000 APs transferred to the Kenya Police Service have been asked to pick their new uniforms before the Friday handover ceremony at the CID training school in Nairobi.

But only 200 officers will attend the event at the CID Training School in Nairobi's South C estate.

“You are directed to surrender all other uniforms as you will no longer be allowed to wear them i.e jacket, sweater, maroon belt and Angola shirt. Kindly collect your uniform soonest possible,” stated the circular.

This is in line with directives from the Inspector General of Police following the changes launched by President Uhuru Kenyatta on 13 September last year.

The officers will now wear the new blue uniforms.

“All those officers who have been posted to the Kenya Police Service are requested to proceed to Industrial Area Police station to change their uniform with new ones,”  the circular states

The circular allows them to only keep ankle boots, black beret, jungle belt and jungle trouser.

“Handing over parade will be on Friday where all officers who will join KPS will be represented by those from Nairobi county,” the circular says.

In the parade to be mounted on Friday, 100 officers in AP uniform will match with Deputy Inspector General (DIG) Administration Police Service (APs), then DIG APs will hand them over to DIG KPS where they proceed to wear the new uniform.

It is foolishness to spend our resources to import things we can get here in Kenya.
News
2 years ago
by IMENDE BENJAMIN News Reporter
News
10 July 2019 - 00:00