21-COURT CASE TO BE WITHDRAWN

Maasais to get 4,000 acres in Kedong after deal

• In the deal, the community will withdraw a case in court challenging the ownership of the ranch.

• More than 2,500 families will be resettled on the land with each getting an equal share. 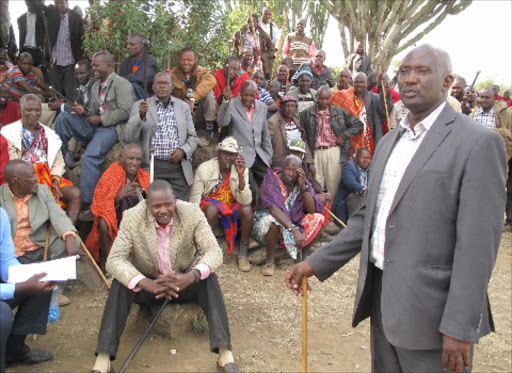 Maasais in Naivasha will benefit from 4,ooo acres following a deal between group under Kitet community and Kedong ranch management.

In the deal, the community will withdraw a case in court challenging the ownership of the ranch.

Addressing the press during special prayers at Suswa trading centre, the community said it was elated by the move to finally settle them on the land they claimed belonged to their forefathers.

Secretary Mike ole Roka said the government had done its part in finding a truce between them and Kedong ranch management. As a result, more than 2,500 families will be resettled on the land with each getting an equal share.

“Kedong ranch has more than 75,000 acres. We are grateful that we will get land. We will move with speed and withdraw the case we filed in court about 21 years ago,” he said.

At the same time, Roka said the community fully supports the government projects being implemented in the area.

He said they had agreed that the projects will be of great benefit to the locals since they will get jobs and be able to fend for their families.

“The dry port and industrial park are set to be built on land adjacent to where we have been allocated the 4,000 acres. We fully support the projects,” he said.

His remarks were echoed by community leader George Mashuko, who said the community is satisfied with the share of the land it got.

He said each family will be  settled and bring to an end the suffering they have endured for long.

“We will benefit from jobs opportunities because we know Kenya, Uganda and South Sudan  have the land for an inland port,” he said.

Kenya Land Alliance's Joseph ole Kishau said the conflict on land ownership in the area has now come to an end following the issuance of the land to the community.

“We respect what the management has done for us, and we will make sure we strive to ensure lasting peace in this region,” he said.