Interior Ministry on the spot over Sh15bn 'faulty' CCTV cameras

Cameras can only identify the colour and the number plate of the object; storage period is 30 days.

• CAS Ntutu told  Senate committee that the command unit domiciled at Jogoo House had no CCTV data primary storage which has been a major setback on the investigations.

•The CAS who appeared before the committee on behalf of CS Fred Matiangi had been put to task to explain why the cameras had failed to end crime in the cities. 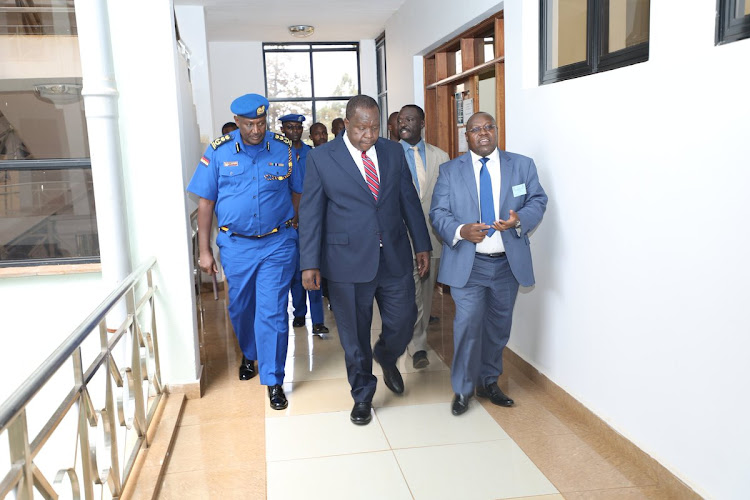 The Ministry of Interior was yesterday put on the spot over Sh15 billion ‘faulty’ CCTV surveillance system and security installations in Nairobi and Mombasa.

“I want to admit that the cameras had some challenges because they could only identify the colour and the number plate of the object and the storage period has also been very short,”   Ntutu told the Senate’s Security, Defence and Foreign Relations Committee.

The tender for building the digital security system was awarded to Safaricom in 2014.

The giant telco was to instal CCTV cameras that transmit real-time data to a central point at the police headquarters and to connect all police stations in the two cities to high-speed (4G) Internet.

Ntutu told the committee chaired by Garissa Senator Yusuf Haji that the equipment can store data for only 30 days after which the data is rendered obsolete.

Ntutu said the command unit domiciled at Jogoo House had no CCTV data primary storage which has been a major setback to the investigations.

The CAS, appearing on behalf of CS Fred Matiangi, had been asked to explain why the cameras had failed to reduce crime rates in the two cities.

Controller of Budget report to be released this week reveals the Presidency squandered Sh174m on travel and hospitality in just 90 days while KDF ...
News
3 years ago

The committee had doubted the reliability of the cameras and questioned why recent high profile assassinations could not be solved using the data gathered from them.

The panel cited the killings of Kabete MP George Muchai and businessman Jacob Juma in Nairobi.

The cameras, they said, have not been able to assist the police to find the killers.

“We are left to wonder why they have not assisted the police to apprehend culprits of these crazy killings,” Nakuru Senator Susan Kihika said.

“Not so long, Kabete MP George Muchai was gunned down together with security officers, in view of a CCTV installation but you (police) arrested weed smoking kids and told us they were the people who killed the MP and his bodyguards,” she said.

Kisumu Senator Fred Outa claimed that despite the government spending billions of shillings in procuring and installing the CCTV Cameras, Kenyans are yet to have value for their taxes.

The CAS, however, said that the security features of the cameras have been enhanced to detect not only the colour and the number plate of the object but also the driver.

“Yes, we had challenges but even so, were able to recover 3,600 motorcycles that had been stolen. Security has improved in the two cities since we installed them,” Ntutu told the committee.

He said that the Ministry is also planning to install 6,500 more CCTV cameras in all the major towns including Kisumu, Eldoret, Nakuru and Nyeri to boost security.