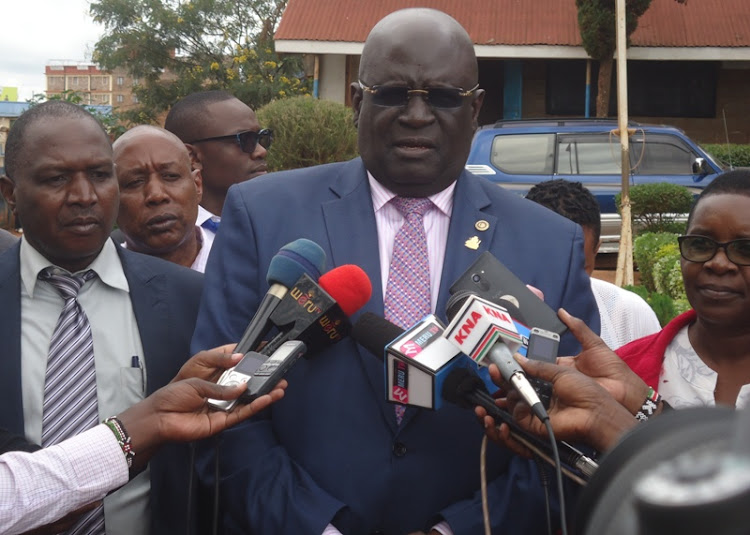 Education Cabinet Secretary Prof George Magoha said closure of the yet to be named universities is meant to improve the quality of education.
Image: Reuben Githinji

Hundreds of jobs will be lost when non-performing public universities are closed, but the exercise will be done in a civilised manner.

The closure of the yet to be named universities is meant to improve the quality of education.

Magoha said the government wants higher institutions of learning to be respected globally. This can only be done by looking at the universities, what they offer and whether it is a priority.

“We want to make sure in the next 10 to 20 years we will have universities that are determined to produce the demands of a changing world,” he said on Tuesday when he opened a forum on terrorism for all universities’ registrars organised by the National Counter Terrorism Centre at Sawela Lodge in Naivasha.

The CS attributed terrorism challenges to corruption at the porous borders where terrorists enter the country illegally, commit crimes and kill innocent Kenyans.

He said there was a need to employ all means to prevent terrorism and violent extremism ideologies from finding space in society.

“Extremist element operatives have managed to infiltrate some learning institutions including primary, secondary, colleges and universities,” he said.

NCTC deputy director Joseph Opondo said they were meeting registrars of all universities as they get first-hand information on students being admitted to their institutions.

Opondo said the move will ensure students are checked on entry and their behaviour throughout college life as one way of cautioning them on extremist activities.

He said Kenya was better prepared to handle terrorism and related activities, noting that the recent attacks had made them to be more vigilant on how to handle the situation in case of an attack.

“The Westgate and Dusit attacks made us more prepared than before and Kenyans know the response. We are getting better over time, thanks to the cooperation we get."

Opondo said they were also working on a policy for returnees who may have joined terror groups to prepare them before rejoining the rest of society.

“We know what they are promised is not what they get when they join the criminal groups and the policy which is at legislative level will help address their plight including counselling before they are allowed back to the society,” he said.

Varsities not only for students, older people can apply for extra courses like communication
Opinion
3 years ago