Survivor, Masai elder to testify in case to legalise FGM

Petitioner says the term FGM is a “misnomer” , was coined by Westerners.

• Medical doctor Tatu Kamau argues that all females, especially adults, should be allowed to make choices regarding their bodies without being restricted by legislation.

• Kamau told the bench that that female circumcision was part of African cultural practices before the advent of colonialism and should not be criminalised. 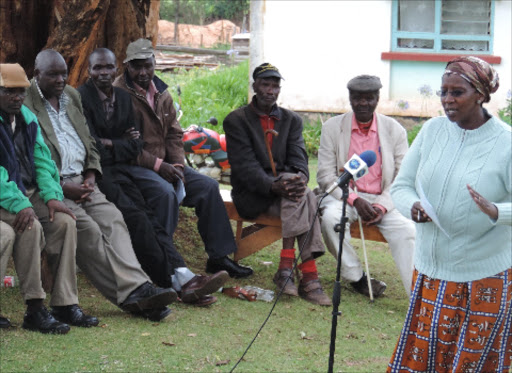 Anti-FGM Board Chairperson Linah Kilimo addressing elders in Elgeyo Marakwet on the dangers of FGM.Photo/File

A survivor, a Masai elder and an expert will testify in a case seeking the legalisation of female genital mutilation.

In the case, medical doctor Tatu Kamau argues that all females, especially adults, should be allowed to make choices regarding their bodies without being restricted by legislation.

Kamau wants the Anti-FGM board, which has been spearheading the campaign against the practice, abolished.

Kamau, who is not represented by a lawyer, says the term FGM is a “misnomer” as Westerners who coined it are now practising it, but refer to it as “female genital surgery”.

“It is a label given to us by those who do not understand it,” she said of the practice and its legal name.

Kamau told the bench that that female circumcision was part of African cultural practices before the advent of colonialism and should not be criminalised.

Kamau told the judges that she will testify in her own case and also play a video clip to try and convince them to agree with her.

He indicated that he will also testify and explain to the court why the FGM practice should be allowed to continue.

“Your honour hii FGM tutafanya kwa makini tujue ubaya ni nini (We will practice FGM and get to know what is bad about it)," said the old man who is also representing himself as an interested party in the case.

For example, the Federation of Women Lawyers (FIDA) have warned that the removal of criminal sanctions on perpetrators of FGM will erase the gains made in sensitising the public against the practice.

Fida had also said that legalising FGM will see more women compelled to undergo the cut to fit into societies.

The case will come up for mention on July 30 for the court to confirm if the parties have filed and exchanged all documents.

FGM has been against the law in Kenya since 2011 but the practice continues.
News
3 years ago

Some residents suggest government should allow safe FGM for women above 18 years
Counties
3 years ago
Post a comment
WATCH: The latest videos from the Star
by JILLO KADIDA News Editor
News
21 June 2019 - 06:00
Read The E-Paper