•Arab Parliament accuses Kenya of trying to pretentiously draw a new and unfounded map in efforts to win over the territorial grounds.

•But Kenya has maintained that it will not cede even an inch of its soil to anyone or any state. 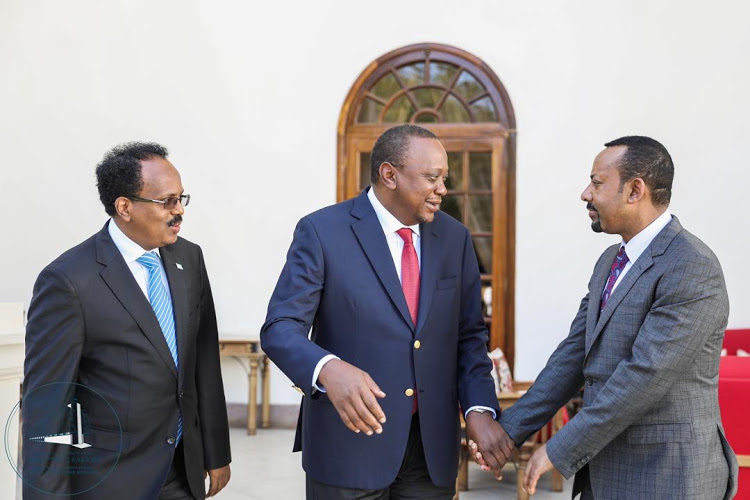 The diplomatic standoff between Somalia and Kenya appears to have taken an interesting turn.

This is after the Arab Parliament cautioned the country against meddling with matters to do with Somalia.

Through the Somalia Ministry of Foreign Affairs, the Arab Parliament said Kenya should keep off the territorial boundaries which have been the subject of a diplomatic standoff between the two countries for years.

The Arab Parliament accuses Kenya of trying to "pretentiously draw a new and unfounded map in efforts to win over the territorial grounds".

“The Arab Parliament calls on Kenya to stop its hands on Somali territorial waters, which are an integral part of the Arab waters, and rejects its false pretensions to draw up a new, unfounded map while rejecting its threats to interfere in Somalia's internal affairs,” read a tweet by the Somali Ministry of Foreign Affairs.

At the Arab League Summit of 2001-Amman, the Arab states agreed to create an Arab Parliament, and came up with a resolution to give Amr Moussa the Secretary General of the Arab League the power to start and create the Parliament.

In 2004, in the ordinary Arab League Summit in Algiers was the official date where all Arab League Members agreed to send their representative to the temporary Parliament sessions that took place in the headquarters of the Arab League in  Cairo, Egypt, with each member state sending four members, until the Parliament is reassigned permanently to its under-construction office in Damascus.

The headquarters was in Damascus until on May 22, 2012 the sessions were suspended and transferred to Cairo. The Arab League is now preparing to move the headquarters of the parliament to Baghdad.

Mishaal bin Fahm Al-Salami (of Saudi Arabia) is the current Speaker of the Parliament.

But Kenya has maintained that it will not cede even an inch of its soil to anyone or any state.

Earlier in the year, Foreign Affairs CS Monica Juma said the government was waiting for a response that meets the minimum threshold from the Somali government over the disputed oil blocks in the Indian Ocean.

Juma said though Somali had issued a statement disputing the claims raised, it was clear they did not deny the existence of a map that depicts the blocks are on Kenyan territory.

"We have noted with concern Somali's intention and plan to auction the oil blocks before January 2020 which is the effective date for sharing between the two countries," Juma said.

The government has maintained that it will not cede even an inch of its soil to anyone or any state. Foreign Affairs CS Monica Juma on Thursday ...
News
3 years ago

She added, "Kenya's position over this matter is inevitable and we shall not cede even an inch of our territory to anyone."

Somali in a letter addressed to Foreign Affairs said it is not offering, nor does it have any plans to offer any blocks in the disputed maritime area until the parties' martime boundary is decided by the ICJ.

It also assured the Kenyan government that it will not undertake any activity within the disputed area as this may jeopardise the delimitation of the boundary dispute at the top UN court.

"In this respect, the Government of Somalia reassures the Government of Kenya that it stands by its commitment not to undertake any unilateral activity within the disputed area until such time that the ICJ renders its judgement," it said in the letter.

But Juma said though there is a pending court case at the ICC over the dispute, Somali's move under claims of protecting its potential maritime space from external users is a clear indication it does not recognise the boundaries.

"In this regard, we are of the view that Somali is deliberately misleading the world and contradicts its commitment at the ICC Court. This move also undermines the principle of good faith," Juma said.

She said Kenya, however, remains committed to a peaceful resolution of the matter.

A few days later, Somalia’s envoy to Kenya was summoned at the government declared Somalia its enemy.

Principal Secretary Macharia Kamau said the move by the Somalia government was "an outrageous and a provocative act of aggression which will be met with unanimous and resounding rejection by all Kenyans and people of good will who believe in the maintenance of international law and order and peaceful and legal resolution of disputes."

As an immediate response, the PS announced that the Kenyan Ambassador to Somalia Lucas Tumbo has been recalled.

Did Somalia abandon the MoU it signed with Kenya in 2009 and all its contents?
News
3 years ago
Post a comment
WATCH: The latest videos from the Star
by PATRICK VIDIJA Investigative Journalist
News
20 June 2019 - 17:02
Read The E-Paper