Party says the reporting was a 'blatant lie' aimed at misleading the public.

• On Saturday, Ruto told off a section of ODM MPs pushing Uhuru to pick ODM leader Raila Odinga as his successor 2022.

• The party has instead said the two spoke about the fight against corruption and the unity of the nation and did not talk of endorsement. 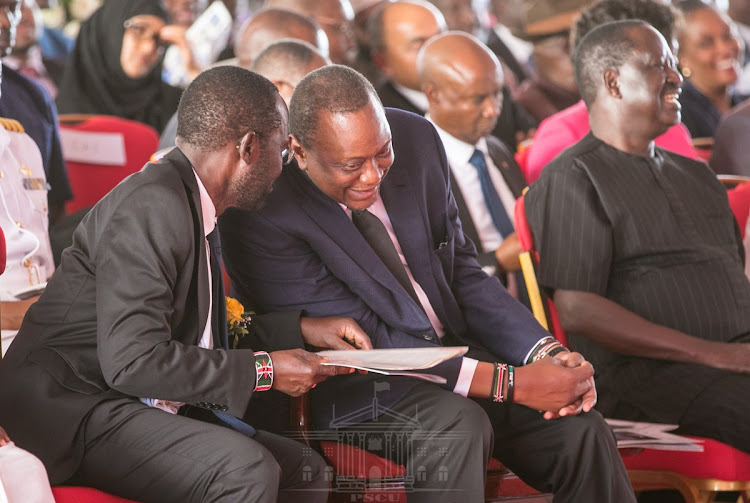 The ODM party has denied claims that it had called for President Uhuru Kenyatta to name his successor during a funeral last weekend.

Through its Director of Communications Philip Etale, the party said a section of the media had misinterpreted the information conveyed by two party leaders during the funeral of Mama Dorka Nyong’o, mother to Kisumu Governor Anyang’ Nyong’o.

ODM has termed the report that Siaya Senator James Orengo and chairman John Mbadi pleading with Uhuru to name party leader Raila Odinga as his successor as a ‘blatant lie’ aimed at misleading the public.

The Orange Party further wants those media houses that had published or aired the story to offer the two legislators an apology.

Etale said the two spoke about the fight against corruption and the unity of the nation and did not talk of any presidential endorsement.

He said ODM has is working on programmes to rejuvenate and revamp its structures including grassroots elections, supporting the Building Bridges Initiative and not politics of 2022.

On Saturday, Ruto told off ODM MPs pushing Uhuru to name Raila as his successor 2022.

Ruto maintained that his bond with Uhuru is intact, despite abundant and mounting evidence to the contrary.

"My friendship with President Kenyatta started long ago before he became President. I supported his ambition since 2002. Nobody should lecture me on how to support the President,” Ruto said.

He said Uhuru will only support a presidential candidate from the party.

He said Uhuru will only support a presidential candidate from the party.
Counties
2 years ago

It's time for Uhuru to politically neuter DP Ruto

You cannot wield power and have it stale or allow it to happen organically.
Siasa
2 years ago
by KEVIN CHERUIYOT
News
18 June 2019 - 14:45