• She said many other Kenyan women experience the same assault and continue to suffer in silence. 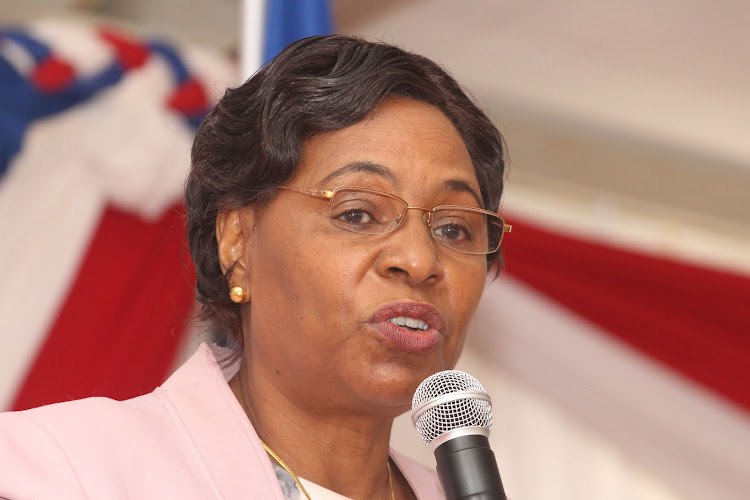 Cabinet Secretary for the Public Service, Youth and Gender Affairs Margaret Kobia at a function at KICC on February 4, 2019.
Image: EZEKIEL AMING'A

This comes after the public attacks directed to Passaris by Nairobi Governor Mike Sonko during the recent Madaraka Day celebrations.

She said many other Kenyan women experience the same assault and continue to suffer in silence.

"No woman leader deserves to suffer the ignominy of such public utterances," the CS said.

Kobia said the normalisation of gender-based violence is worrying and set a bad precedent for Kenya's children.

"Leaders need to exercise self-restraint and self-control. No worthy leader, man, woman or youth should unleash such disrespectful utterances in public,” she said.

The CS said her ministry will continue working with stakeholders to ensure no individual suffers abuse or have their rights violated as a consequence of their gender.

During the Madaraka day celebrations at Pumwani grounds, Sonko publicly bashed Passaris for making 'numerous' phone calls to him.

"I am not your husband that I should answer your calls anytime you want. Let us respect one another. Even President Uhuru Kenyatta does not respond to my calls every time,"  he said.

The governor went on to tell Passaris to stop asking him how he spends his money.

Sonko later defended his remarks saying he responded to her accordingly.

"I didn’t abuse her. I told her I am not her husband, which is true. Why I should apologise for speaking the truth?" Sonko posed.

Governor says he responded to woman rep accordingly, and will only apologise when she does
News
3 years ago

Told Passaris he isn't her husband and shouldn't expect her calls to always be answered.
Counties
3 years ago

Passaris said Sonko doesn't pick his calls and he retorted saying he isn't her husband.
News
3 years ago
Post a comment
WATCH: The latest videos from the Star
by SHEILA NJAMBI
News
07 June 2019 - 15:24
Read The E-Paper