•  54 women have been killed between January and May this year. 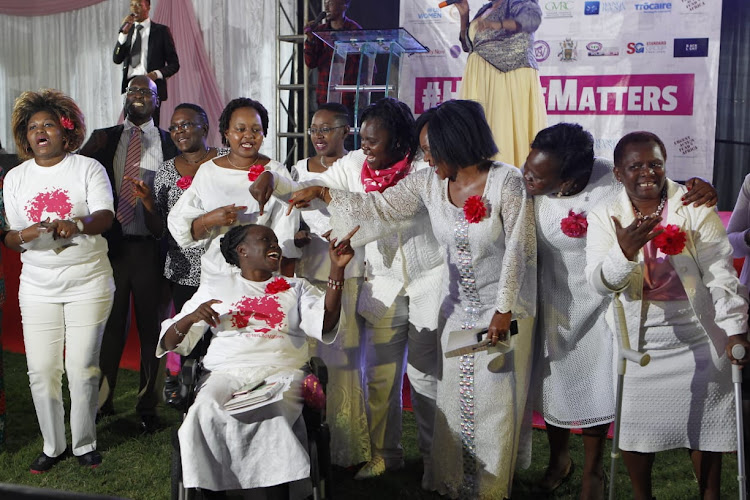 FEMICIDE: Women leaders at University of Nairobi during vigil to commemorate women who died through gender-based violence, on Thursday.
Image: MONICA MWANGI

"My daughter's death haunts me every morning when I wake up and help her children prepare for school."

That's what A Stanislaus Mbai, Caroline Mwatha's father, told Interior CS Fred Matiang'i during a vigil at University of Nairobi grounds on Thursday.

Families of the slain women said the justice system was too slow, making them relive the horror of losing their loved ones.

The Thursday ceremony was held to commemorate the women killed through sexual and gender-based violence.

Matiang'i was accompanied by Inspector General of police Hillary Mutyambai and women leaders from the Embrace movement.

Counting Dead Women Kenya says at least 54 women have been killed between January 1 and May 27.

Caroline Nyakinya, Ivy Wangechi's aunt, said her family was in darkness since Ivy's murder in April.

"Her parents couldn't make it today because they are still traumatised," she said.

The family had been making plans to attend the final-year medical student's graduation ceremony in December.

"Instead, we are making trips back and forth trying to seek justice," Nyakinya said.

Two years after Rhoda Mumbi was murdered on holiday, her family is still in court pursuing justice.

Her children were aged two and four at the time of her death and the family says it wants to be able to explain to them what happened to their mother.

"We want to get justice for her because otherwise what will we tell the boys we did to the man who killed their mother?" her cousin asked.

Mwatha's father said the people responsible for his daughter's death had been released, frustrating their pursuit for justice.

His family is still in mourning and his son has fled e country for fear of his life.

"Every morning when my grandchildren wake me up to help them prepare for school, I think if their mother was here, she would have taken care of them," he said.

"It takes an animal not to feel pain when listening to the families," Matiang'i said.

Together with the DCI and IG, he pledged to change the environment for women because "he was frustrated by the reports he received every morning."

"The DCI will again double the number of children's officers to deal with crimes against children and we will work with the IG to revive gender desks at police stations," he said.

Matiang'i said he was ready to engage civil society "as soon as possible" to move the country to the next level.

They said Parliament should allocate sufficient resources to deal with gender violence, set up recovery centres in 47 counties and a national inquiry on why women are dying.

"We want the Judiciary to set up special courts to ensure justice is served," Wangechi Wachira from the Centre for Rights Education and Awareness said.

He advised parents to  teach them to live as social beings with positive values.

Youth and Gender CS Margaret Kobia said that to understand the problem, the root cause of femicide needs to be found out.

"We need statistics and data so  we are able to get actionable intervention measures," she said.

Report shows women are far more likely to die at the hands of someone they know
News
3 years ago
by NJERI MBUGUA MbuguaENjeri
News
01 June 2019 - 00:00