In Summary
by MOSES ODHIAMBO Journalist and Political Writer
News
29 May 2019 - 00:00
Read E-Paper 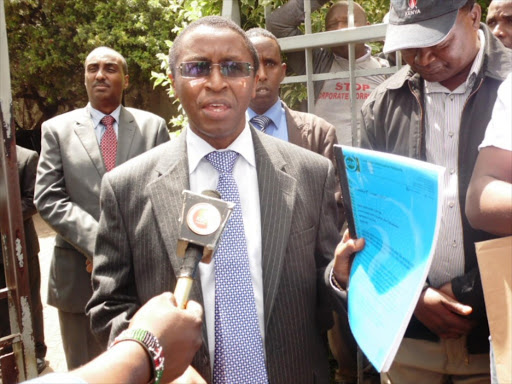 EACC failure to unravel the Chickengate scandal yesterday returned to haunt former deputy CEO Michael Mubea in his quest to be appointed Kenya’s ambassador to Ireland.

Members of a parliamentary committee probing the former anti-graft official for the job raised concerns that the case is yet to conclude in Kenya yet the UK had convicted officials linked to the scandal.

The Defence and Foreign Relations Committee chaired by Katoo ole Metito pointed out that there was no way one jurisdiction could resolve the matter and another fails yet the facts are the same.

They are accused of receiving bribes from Smith&Ouzman to facilitate a tender award for the printing of ballot and exam papers.

Their alleged co-conspirator Nicholas Smith – the owner of the firm - has already walked out of prison having served his full three-year term.

Citing fears of collusion and laxity on the part of EACC, MPs said the commission has not shown seriousness to resolve the case among other high profile crimes.

Mubea was also accosted with questions on how he handled a probe by SRC and the Ombudsman on claims he was drawing a double salary from the commission.

Imenti Central MP Moses Kirima challenged the nominee on why he (Mubea) challenged the ruling ex-parte after he was found guilty of drawing two salaries.

Lawmakers also put the Dublin envoy nominee to task over the sale of EACC headquarters as well as claims he hid files in the case of former NSSF managing director Tom Odongo.

The legislators did not mince words with Mubea even asking him to address himself to fears that the Executive could be executing a strategy to remove him from EACC diplomatically.

“Don’t you think that it was a vote of no confidence in you when the appointing authority did not consider you for CEO job despite the long period you have been at EACC?” Koech asked.

“An ambassadorial job is not the same as anti-corruption. Are you running away from your crimes at the EACC?” Lodepe asked.

“Why are you being pushed out? Is the Executive taking away EACC institutional memory? Or are you standing in the way of others,” Tuwei added.

An ambassadorial job is not the same as anti-corruption. Are you running away from your crimes at the EACC

“Your colleagues refer to you as the 'mafia' sitting on files and blocking cases. Why are the allegations specified against you and not others?” Kilonzo asked.

“Now that EACC seems to have failed in its job, does it concern you that someone is likely to doubt your capacity to handle the envoy assignment,” Hassan asked.

In his defence, Mubea blamed the courts for the delays in conviction of Chickengate suspects since 2014 saying the EACC’s hands are tied as there is nothing it can do once cases land in court.

“Our hands are tied. What more can we do once we investigate cases and take people to court? It is for the delays in court processes that we have now focused on asset recovery,” he said.

He said assets valued at over Sh10 billion have been fully investigated and are in the process of being recovered for the same to be reverted to the state.

He added that Sh10 billion assets have been recovered since 2017 adding that the EACC is overwhelmed by a huge workload.

“I don’t compromise cases. The direction they take is not a one man’s decision. Over time, I have developed enemies who are out to malign my name. Why not arrest me? I am not above the law.”

On Integrity Centre, Mubea told MPs that the procurement decision rested with commissioners as the same is not in his docket. “It had nothing to do with me. I was never involved in the sale.”

He also addressed the double salary question saying a court ruled that there was no breach of the law as his pay fell within the SRC ceilings.

On Integrity Centre, Mubea told MPs that the procurement decision rested with commissioners as the same is not in his docket.

“There was malice. The SRC and CAJ could not explain their reason for the complaint,” he said.

Mubea suggested that to ease the pressure on the commission, a decision would have to be made so that the agency focuses mainly on high profile crimes.

On questions he was being relieved of his duties diplomatically, the officer said he believes that he “has served EACC with utmost integrity” otherwise he would have been arrested.

“I have no fear that anything would follow me after I leave the agency in case my nomination is approved by this honourable house,” he said.

“Diplomacy has been my desire. I have worked with diplomats. I look forward to the appointment.”

Mugwe was put on a tight spot after he denied knowledge of the dealings in the Tokyo embassy scandal despite appearing in court over the same as a witness.

The official told lawmakers that he only made payments and that he did not know there were issues with the procurement of the building to house the Tokyo embassy.