• Former Minister Simeon Nyachae was among 125 individuals and companies who benefitted from the large tracts of land.

• The ADC board never sanctioned the land transactions and now wants the land back. MPs asked why they didn't try harder to regain it. 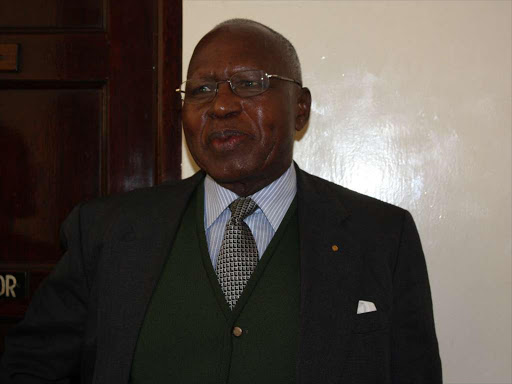 The land is in Magarini constituency in Kilifi county.

A document tabled before a House committee on Tuesday said Nyachae was among 125 individuals and companies who benefitted from the large tracts of land.

The property is being claimed by residents, a matter that has attracted the attention of the Ethics and Anti-Corruption Commission.

From the documents tabled by Agriculture CAS Andrew Tuimur, it appears that powerful individuals who served in Moi’s government dominate the list of people who allocated the prime land.

They were allocated the land at the expense of residents who literally have become squatters.

Gideon is said to be former Managing Director of the Agricultural Finance Corporation and had relations with Moi’s family.

The National Assembly’s Lands Committee heard that land sales to powerful and well-connected politicians from 1994 to 2006 was never sanctioned by the ADC board. This happened despite another corporation’s subsidiary company – Lands Limited – defying the board and selling the property.

ADC is among the state parastatals run by board members.

The Agriculture Cabinet Administrative Secretary Andrew Tuimur admitted that the corporation’s board did not approve the arbitrary allocation of the land to third parties. He appealed MPs to help ADC recover the land in private hands.

“I submit that ADC illegally allocated the land to well-connected individuals and private companies,” Tuimur sad.

He was appearing before the committee chaired by Kitui South MP Rachael Nyamai.

“If you look at the list, there are powerful and influential people and again you find some of the individuals were again given land in other ADC farms.”

The CAS was accompanied by Agriculture Development Corporation MD Mohammed Bulle during the two-hour session.

“We really need that land to be repossessed, we want Parliament to help us repossess this land,” Bulle said.

“You have never gone to court or written to any investigative agencies over the land and here you are claiming that you want the land back,” Nyamai said.

We really need that land to be repossessed, we want Parliament to help us repossess this land

In 2010, EACC froze further transactions on the land but this was after the state-funded parastatal had sold 66 per cent of the 912.38 contested land, mainly to powerful individuals issued them with title deeds.

The remaining 33 per cent of the farm had also been sold but only the title documents had not been transferred to the buyers.

Tumuir confirmed to the committee that ADC raised Sh42,483,180  from the sale of the land.

The National Land Commission concurred with the EAAC preliminary report stopping the further transfer of the vast land to third parties.

Based on the freezing of transfers, residents of Sabaki ward in Magarini constituency petitioned the National Assembly. They asked their MP, Michael Kingi, to help them repossess their ancestral land which they claimed was taken from them unprocedurally during the colonial era.

Before independence, the residents of Sabaki ward were forcefully evicted by the colonial government to pave way for establishment of the Kisima Farm owned by a foreign national.

The forced eviction and subsequent was done without any compensation.

After Independence, the Kenyan government repossessed the farm, including the land, and vested it to ADC, a state corporation. It was later renamed Sabaki Farm.

In the petition, the residents wanted Parliament to have them resettled on the Sabaki ADC farm. They say this is their ancestral land grabbed by the colonialists.

“We pray that the National Assembly through the department of Lands committee cause the National Land Commission with a view of revoking all the title deeds issued to individuals who were illegally allocated land,” read part of the petition.

The Agriculture Development Cooperation has given 100 acres to enable the Trans Nzoia government to put up a university. Governor Patrick Khaemba ...
News
6 years ago
Post a comment
WATCH: The latest videos from the Star
by LUKE AWICH Political Reporter
News
29 May 2019 - 06:24
Read The E-Paper