• This year's maize production will be 50 per cent less due to unreliable rainfall.

• Price of 90kg bag of maize has risen by 30% as farmers hoard produce. 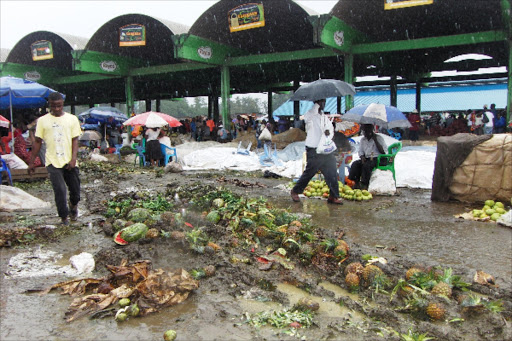 Kenyans should brace for tougher times after inflation, insecurity and food prices rose sharply due to prolonged drought and unreliable rainfall.

A report by the National Drought Management Authority states the price of maize has gone up from Sh2,300 per 90kg bag in January to Sh3,500 in April. This is a 30 per cent increase.

“In Kwale a 2kg bag of maize [baptised gorogoro] was retailing at Sh60, having increased by a 70 per cent margin from Sh35 posted in March,” the report states.

It says this year's maize production will be 50 per cent less due to unreliable rainfall.

The May report called the National Drought Early Warning Bulletin was released on Monday. It states the maize shortage grew worse after traders hoarded the produce in anticipation of higher prices.

“The prices of maize are expected to continue rising and therefore the likelihood of the purchasing power of livestock keepers remaining low shall be high as the terms of trade stagnate,” the report reads.

Many farmers reduced the acreage under the crop following the delayed and below average rainfall.

Most people have reduced the number of meals taken per day and are now suffering from malnutrition, especially children, the report notes.

The drought is worse in Baringo, Kwale, Isiolo, Kitui, Tharaka Nithi and Makueni, where Kenyans walk an average of 4.5km per day in search of water and pasture. Others are Tana River, Samburu, Kilifi and Lamu.

“In April, additional counties entered into the alarm drought stage, with the total number of counties in alarm increasing from five in March to 10 in April. Counties which are in the alarm stage are Wajir, Mandera, Garissa, Marsabit, Turkana, Baringo, Kilifi, Samburu, Tana River and West Pokot,” the report states.

“As at end of April, out of the 23 ASAL counties, 10 were reporting a worsening trend. In Garissa people are walking 22km to find water and pasture most surface water sources such as rivers, water pans and dams dried up as a result of the prolonged dry spell.

“Average milk production in Lamu, Mandera, Garissa, Samburu, Kajiado and Narok was below long-term average by 69, 47, 44, 42, 39 and 38 percent respectively following to shortage and poor quality of both pasture and browse.”

“By end of April, most farmers in areas such as Kitui, Embu, Makueni, Meru, Narok, Nyeri, Laikipia and Tharaka were mainly engaged in land preparation, planting or replanting, which is not usual because in a normal season, weeding would have been taking place,” it reads.

The report calls for close monitoring to facilitate early response. It recommends that farmers be advised to plant drought-tolerant and/or early maturing crops.

The report states broken water infrastructure must be repaired and tanks installed at strategic points to facilitate effective water trucking in areas that are currently water stressed.

Affected families should access relief food and cash to households.