Macharia says 32 buses had arrived and are in Mombasa.

• Macharia says the focus should not only be on how the journey starts and ends but should also be beyond.

• The DMUs, five coaches and spare parts from a Spanish state company will cost  Sh1.15 billion. 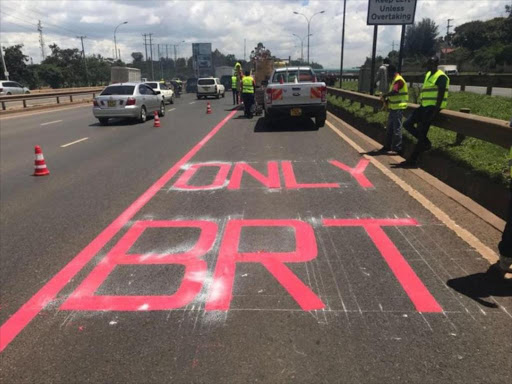 The national government plans to connect the commuter rail and the Bus Rapid Transit (BRT) system for efficiency.

Transport CS James Macharia on Thursday said the BRT will connect passengers from railway stations to the city and vice versa.

The Diesel Multiple Units meant for the commuter rail project are expected to arrive in June.

Last week, the Star exclusively obtained a photo of one of the buses in South Africa, where they have been shipped from.

Macharia said 32 buses had arrived and were in Mombasa.

"Focus should not only be on how the journey starts and ends but should also be beyond. How do the passengers move from the railway station to their final destinations?" Macharia said.

He further said all contracts regarding the commuter rail project have been signed and the DMUs will soon arrive in the country.

As part of the Nairobi Commuter Rail (NCR) revitalisation efforts, Kenya Railway in February announced they will be purchasing 11 DMUs this year.

The DMUs, five coaches and spare parts from a Spanish state company will cost  Sh1.15 billion.

The DMUs will be refurbished.  Kenya Railway said they are cheaper and ready for use compared to newer ones, which are costly and take time to be acquired.

“The cost of new similar DMUs range from Sh590-Sh940 million and would take a minimum lead time of five years to acquire 11 new DMUs costing Sh6.5-10.3 billion with a design life of 30-40 years,” Kenya Railways said.

The new DMUs will be deployed in five routes – from Nairobi Central Station to Embakasi Village, Syokimau, Kitengela, Kikuyu and Thika.

The revamping of the commuter rail services will increase passengers using the train to 132,000 compared to the current 132,000 passengers.

Currently, rail transports only one per cent of city residents during peak traffic hours in Nairobi.

BRT should be public, or private – it can't be both

BRT needs a dedicated bus lane. This is available only on Thika Road and Outering Road.
Opinion
2 years ago

Why Nairobi's BRT was a cart-before-horse move

Roads not designed for system, not enough space for BRT lanes, roads encroached on
Counties
2 years ago
by MAUREEN KINYANJUI News Reporter
News
18 May 2019 - 00:00