• Scores of LGBT+ and other refugees have been protesting outside the UNHCR offices in Nairobi.

• More than 23 LGBT+ refugees have been arrested and are facing charges such as illegal assembly, creating a disturbance and assaulting police officers. 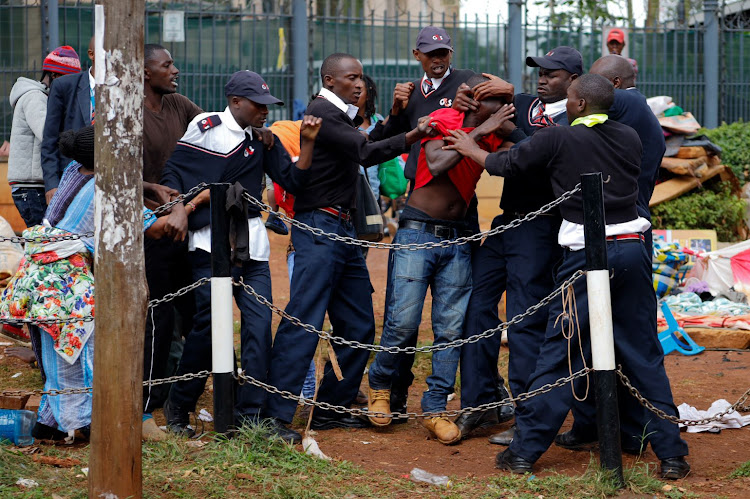 One of the refugees being mishandled by the G4S security guards outside the UNHCR building on 10th, May 2019.
Image: VICTOR IMBOTO

Scores of LGBT+ and other refugees have been protesting outside the U.N. refugee agency (UNHCR) offices in Nairobi for several days demanding support with housing, financial assistance and documentation allowing them to work.

Many LGBT+ refugees say they are not safe in Kenya as discrimination against sexual minorities is prevalent - and are also demanding to be resettled in a third country.

The UNHCR says places are limited as rich nations are accepting fewer refugees.

The UNHCR said the demonstrations turned violent last Friday after some refugees threatened staff and security guards, and prevented vehicles from entering and exiting its compound -clashing with police who used tear gas to disperse them.

"We deplore these violent actions (which) not only endangered these few individuals and but also other refugees present, including women and children," Fatihaa Abdalla, UNHCR Representative in Kenya told journalists late on Wednesday.

"We are urging for calm and restraint and will continue to closely monitor and seek solutions. We remain very concerned that the situation could once again deteriorate if the standoff continues."

The LGBT+ refugees and asylum seekers said they were demonstrating peacefully when they were physically assaulted by the police and were trying to defend themselves.

More than 23 LGBT+ refugees have been arrested and are facing charges such as illegal assembly, creating a disturbance and assaulting police officers.

"New arrivals are being forced to go to Kakuma refugee camp where they face violence, other refugees have been waiting up to five years to be resettled in another country as we are not even safe here," said Allan, an LGBT+ refugee from Uganda.

"Some people need funds and accommodation. We cannot work here and are often evicted when people find out we are gay. But the UNHCR is not listening to our problems - protesting is the only way to make them listen."

African countries have some of the most prohibitive laws against homosexuality in the world, with punishments ranging from imprisonment to death.

Although gay sex is punishable with up to 14 years in jail in Kenya, the law is rarely enforced. The east African nation is seen as more tolerant than neighbouring Uganda and Tanzania, but the LGBT+ community still faces discrimination.

Many of the more than 750 LGBT+ refugees - predominantly from Uganda - are forced to live in the shadows and pushed to the brink due to a lack of protection, safe housing and employment, say campaigners.

The Refugee Coalition of East Africa (RefCEA) - an alliance of LGBT+ refugee groups in the region - said that it did not support violence under any circumstances.

"However, the truth of our situation is that remaining quiet and complacent often means remaining unnoticed, poor, unable to work, and homeless," said the RefCEA in a statement to the Thomson Reuters Foundation.

"We continue to push for the UNHCR to advocate on our behalf and for the government to respond in kind. Without proper documents we cannot work. Without work we cannot live."

Seen as a refuge in the volatile east African region, Kenya hosts around half a million people fleeing conflict, drought and persecution from countries such as Somalia, South Sudan, the Democratic Republic of Congo, Ethiopia and Burundi.