• Kagame is the current chairman of the Smart Africa Initiative.

• It's a continental body that aims at creating a single digital market. 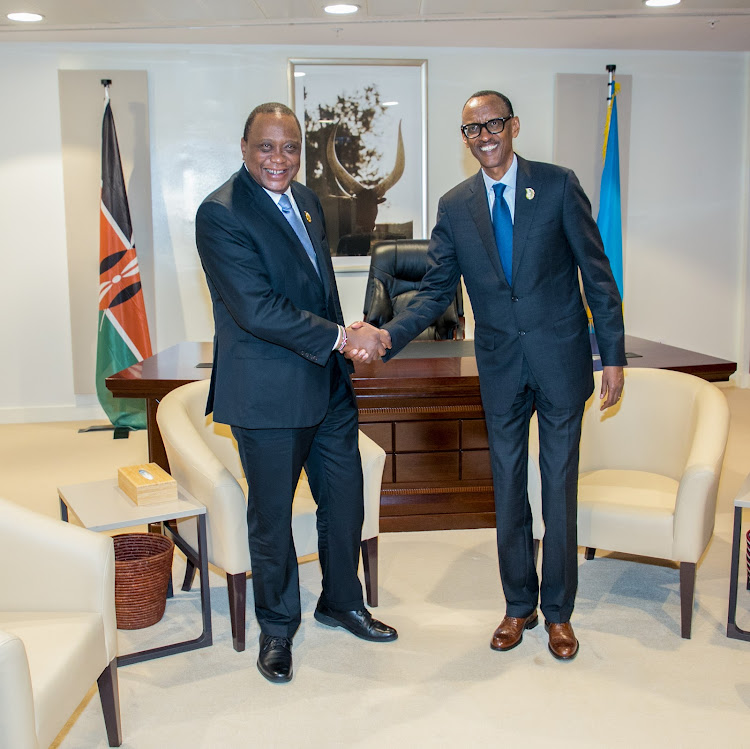 President Uhuru Kenyatta on Wednesday called on African countries to prioritise the integration of ICTs in their development plans because they hold immense economic transformation potential.

The President spoke when he unveiled Kenya's digital economy blueprint to investors and Heads of State attending the Transform Africa Summit 2019 of the Smart Africa Initiative in Kigali, Rwanda.

The Heads of State present at the unveiling included President Paul Kagame of Rwanda and Boubakar Keita of Mali.

Kagame is the current chairman of the Smart Africa Initiative, a continental body that aims at creating a single digital market.

Kenya's  digital economy strategy themed "powering Kenya's transformation" was unveiled in the presence of over 4,000 participants  among them government bureaucrats, policymakers, innovators and technology investors who are meeting to discuss how ICT resources can be harnessed to boost African economies.

Through the blueprint, the government aims at enhancing the contribution of ICTs to the economy through digital governance solutions, digitising business processes, facilitating infrastructure delivery, innovation driven entrepreneurship and promotion of digital skills and values.

As a champion of the digital economy on the continent, President Kenyatta told a summit panel discussion that Kenya has invested heavily in its digital network and is partnering with various organizations to ensure efficient connectivity for all.

“Our vision is that in the next five years, every part of the country will be connected, thus allowing all citizens partake in the digital movement,” said President Kenyatta.

The President also spoke about the central role of the youth in the digital economy in Africa saying Kenya had fashioned a special intervention targeted at empowering her young people with practical ICT skills.

"We are encouraging the youth to be proactive and tap into the digital market through our Ajira programme that has seen many get online jobs," he added. Earlier, President Kenyatta toured various exhibition stands at the summit including that of Kenya where various products that enhance efficiency and use of technology in various sectors of the economy including agriculture were showcased.

In his address, President Kenyatta said Kenya will be at the forefront in driving Africa's digital economy adding that the country's globally acknowledged and revolutionary innovations such as M-Pesa mobile money ecosystem are a demonstration of the continent's limitless ICTs potential.

He said Africa stands on the brink of a major transformation, not only as a new frontier for investment but as a continent driven by a young, vibrant and aggressively innovative population, brimming with immense potential.

“We are the new frontier for trade and investment with estimates indicating that by 2025, business opportunities in Africa will be about US$ 5.6 trillion.  More importantly we have evolved platforms for driving this collective destiny of our prosperity,” said President Kenyatta.

President Kenyatta underscored the importance of technology as a fundamental element of Africa’s economic journey to prosperity saying he looked forward the roll out of a Pan-African digital economy strategy. The Head of State said Kenya's proactive digital economy strategy gives prominence to five pillars among them an infrastructure that is available affordable, resilient and reliable.

“Achieving ubiquitous, fast, and inexpensive internet connectivity for African businesses and households is critical to unlocking the potential of the digital economy.  Connectivity needs to reach a certain threshold in order for users to access digital service,” said President Kenyatta.Besides infrastructure, the Head of State said the availability and use of digital services and platforms to enable public service delivery is of immense importance.

“Currently, the Kenya Government has over 200 digitized services offered through Huduma Centres countrywide as well as an online self-service platform, E-Citizen,” he told the summit. The President said Kenya had taken a bold move to digitize core government services such as filing of tax returns where the Kenya Revenue Authority (KRA) provides services  through the iTax system that is linked to the Intergrated Finnacial Management Information System (IFMIS) and the Central Bank.“This digital system has helped to speed up assessment and service delivery of the country’s tax administration,” he said.

On electronic commerce, President Kenyatta noted that it would be very difficult to conduct business across Africa without the ability to pay remotely through digital channels.“Indeed, 39% of private enterprises in Kenya are engaged in e-commerce and 70% of all e-commerce payments in Kenya are settled through various mobile money payment platforms,” he said.

President Kenyatta said that the future of African economies will largely depend on innovation-driven entrepreneurship and called for policies that support local innovations. “The presence of an ecosystem that supports home-grown firms to generate world class products and services has greatly helped in widening and deepening of digital and economic transformation. Kenya boasts of a robust innovation ecosystem,” the President said.

The Kenyan leader however cautioned against the growing misuse of technology saying social vices propagated, especially by young people, threaten to widen divisions based on African narratives of ethnicity, social class, religion and race.The President is accompanied by ICTs Cabinet Secretary Joseph Mucheru among other senior government officials.

Microsoft to set up technology centre in Kenya

The centre is expected to establish a collaborative engineering springboard for new technology investments.
Sasa
3 years ago

Microsoft will hire more than 100 local engineers to work in the new Africa facility
Business
3 years ago
Post a comment
WATCH: The latest videos from the Star
by PSCU
News
15 May 2019 - 21:38
Read The E-Paper