HOW UAE RULER WAS SCAMMED

Consignment worth millions of shillings was from DR Congo

• Each time Sheikh spoke to President Kenyatta he raised the gold issue. 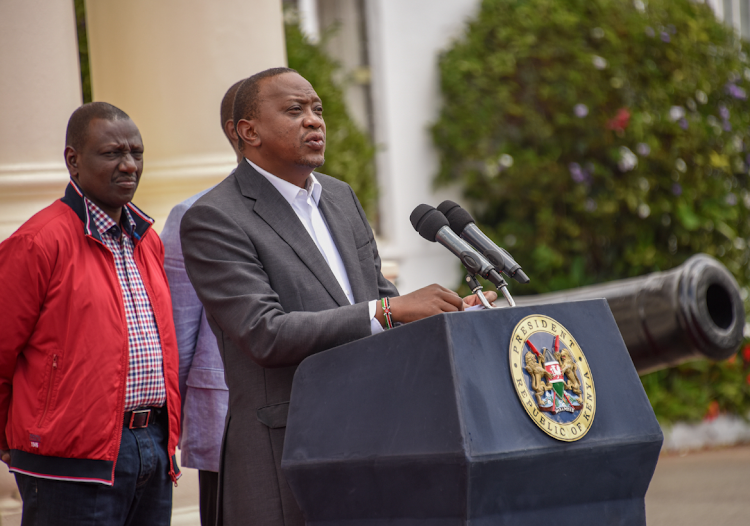 President Uhuru Kenyatta ordered a crackdown on gold scammers after the ruler of the United Arab Emirates Sheikh Mohammed bin Rashid Al Maktoum complained to him that his gold had been seized at JKIA.

His business associate Ali Zandi who runs a gold trading company in Dubai had informed Sheikh Maktoum that  their gold consignment worth millions of shillings from DR Congo had been detained at the Jomo Kenyatta International Airport.

“Each time he spoke to President Kenyatta he raised the gold issue and when the President checked there was nothing like that. He was very pissed off and ordered security agencies to find those involved in conning Sheikh,” said a State House source familiar with the events.

It also emerged yesterday that a well-known political operative tried to unsuccessfully drag ODM leader Raila Odinga into their scheme.

“When Raila was in Dubai a few weeks back, this operative went to his hotel and asked Raila to help secure the release of the gold at JKIA. He then called a number saved in his telephone as CS Fred Matiangi and handed it to Raila.

"But Raila quickly realised that it wasn’t Matiang’i on the line and returned the phone to the owner. He warned him against using his name in his dealings and ordered him out of his hotel,” a Raila aide said yesterday.

The scam began mid last year when the political operative got intouch with the Dubai-based Zandi and cut a deal for a gold consignment that was supposedly in DRC.

A total of 15 suspects arrested.
News
2 years ago

According to police sources, no sooner had Sheikh paid some cash on September 25 than his Kenyan contacts began spinning the stories.

When Dubai put pressure on them, they then said the consignment had been seized at JKIA and even printed fake front pages of two leading local newspapers as proof.

On December 15, a senator who had been working with them flew to Dubai and assured  Zandi that he will use his influence to have the gold released but at a fee.

He also said he had spoken to the relevant minister who requested Sh200 million upfront. Sheikh reportedly declined his proposal and the talks collapsed.

But the scammers would not give up. On December 24, Sheikh’s representative tried to follow up on the gold. He checked into Serena Hotel where he stayed for days as he pushed for the release of his gold.

On Christmas Day, Zandi was taken to the airport and was shown "part of his consignment" which he confirmed and even signed on the boxes.

On January 4, the fake gold dealers intensified their conmanship. Their leader, the political operative, approached Sheikk Maktoum’s man  on behalf of a fake Fred Matiang’i and demanded some Sh200 million for the fake minister.

Soon after the senator in the scheme contacted Zandi to reduce the fake minister’s request to Sh70 million.

After negotiating, they agree a fee of Sh15 million upfront and another Sh10 million once the goods were loaded on the plane.

On January 7, the senator received another Sh70 million at Serena Hotel and promised to have the goods sent to Dubai within three days.

After the three days and his goods were still stuck at JKIA, Zandi insisted on meeting the said Cabinet Secretary and he was driven to Kempisiki and later to Karen Blixen where he finally met the man masquerading as Matiang'i.

The fake Matiang'i assured Zandi that he will have is gold released within days.

On January 10, Zandi flew back into the country and was taken to a safe house while blindfolded.

The compound, according to investigators, was guarded by a large number of Administration Police and an AP lorry was parked on the driveway.

Zandi was taken to the basement with yellow walls and was shown more fake gold which his host said was part oh his consignment.

The scammers then printed more fake breaking news headlines that said police were looking for a foreigner who was behind gold that had been seized at the airport.

The senator then met Zandi and asked him to leave the country immediately since police were looking for him.

Zandi was flown to Kisumu International Airport by the scammers where he found another chartered plane waiting to fly him to Dubai.

Kinoti said foreigners should first contact the Dep’t of Mines and Geology for procedure.
News
2 years ago

Four foreigners, Kenyans arrested with fake US Dollars and gold

Among them are one Congolese, two Tanzanians and one Nigerian
News
2 years ago

Police discover bags of cement passed off as gold