Some had bleeding gums and scars on their faces

• Refugees have been picketing since Monday seeking an audience with UNHCR and asking for the removal of commissioner Kodeck Makori.

•They complain of ill-treatment and extortion. 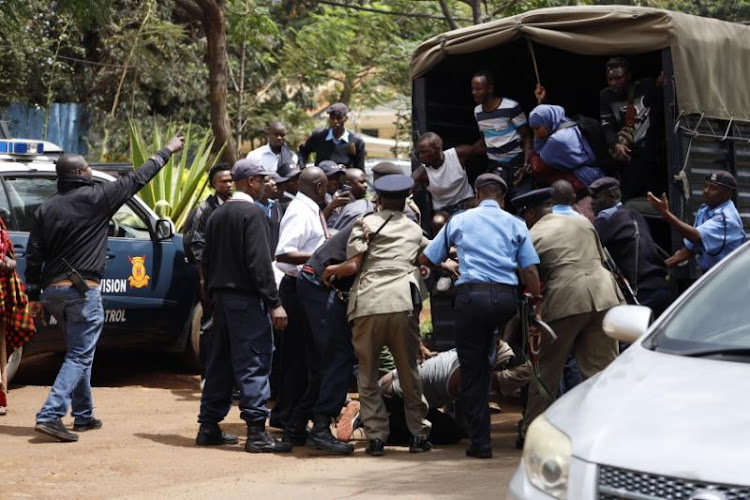 Six refugees were injured and 30 arrested during a protest at UN refugee agency offices in Westlands.
Image: VICTOR IMBOTO

Seven refugees were injured and 17 arrested during a protest at UN refugee agency offices in Westlands.

The over 200 refugees have been camping at the United Nations High Commission for Refugees (UNHCR) offices for over seven months.

This reporter witnessed the police and G4S officers rounding up some of the refugees and descending on them with blows and kicks.

Others were beaten with pipes and timber rods, as tear gas canisters were lobbed to disperse those who seemed defiant.

Of those injured some had bleeding gums and scars on their faces. Others writhed in pain, complaining of broken ribs.

G4S officers later gathered all belongings of the refugees and set them on fire.

The leader of the refugees, Moses Bazira, had blisters and scars.

Bazira said they have been picketing at the offices since Monday, seeking an audience with UNHCR country representative and commissioner to Kenya’s Refugee Affairs Secretariat.

“We have been sleeping in the cold here for over seven months. Others here are seeking protection; some want documentation while others need resettlement,” Bazira said.

“But instead of being given protection we need as refugees, we have been abused, violently beaten and sometimes rounded up. Feeling dejected, on Monday we decided to stage a peaceful protest.”

They complained of being tossed from one agency to another by both RAS and UNHCR officers, being beaten up by G4S officers on orders from UNHCR. They also complained of police extortion.

“I have been here for over two weeks. Even though my stipend for upkeep has been approved. UNHCR officers always sent me to HIAS. When I arrive at HIAS offices I am sent back here and the circle continues,” Simon Ruta said.

“This being taken round in circles is aimed at pushing me to fatigue so that I give up, or have to bribe to get my dues,” he said. 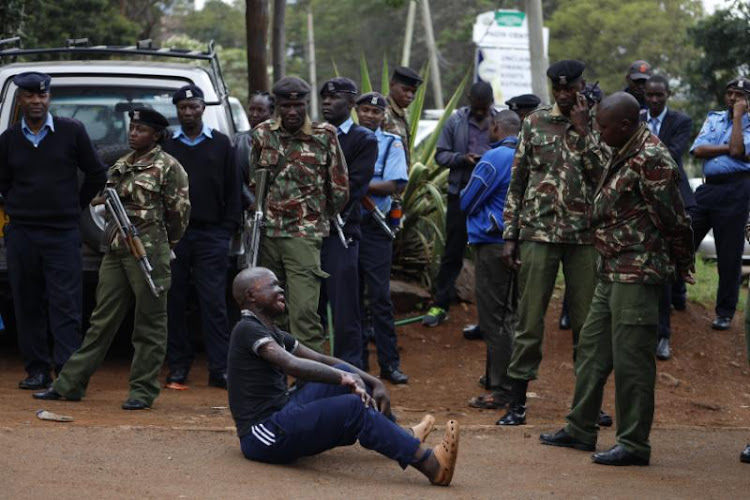 The refugees have been picketing since Monday, seeking an audience with UNHCR country representative and commissioner to Kenya’s Refugee Affairs Secretariat.
Image: VICTOR IMBOTO

Mandeeq Omar said she was arrested and thrown to Lang'ata police cells where she stayed for two months.

“I was released but I came here to demand where my child who was separated from me was. But all we have been treated to is beatings, clothes, and papers burnt,” she said.

“We are defenceless people. Why do police and G4S turn on us with guns, batons and tear gas? All we are asking is for Makori to go. We don’t want him. He is behind our pain,” Alfred Mutete said.

During the melee children, pregnant women and disabled were not spared.

“What were they doing at UNHCR offices? There is no camp and home there. How can they even complain of mishandling?” Makori said.

“You see they have a right to be protected but they have to accept that this county has laws and when they are told your issues will be sorted they should respect that. The problem is when they are besieging an office,” he added.

Makori said the refugees started by being unruly and riotous. They fought the police when they were being calmed, he stated.

“Most of them are not refugees but asylum seekers. There is a procedure for how asylum cases are sorted out.  You don’t come here and dictate to us how you want things done,” Makori said.

He dismissed claims of demanding bribes, frustrating and setting the refugees and asylum seekers up for police extortion.

“If my officers are demanding bribes then they cannot go to UNHCR to complain.  They should have come to our Lavington or Shauri Moyo officers. That has not happened,” he said.

Makori said the demands of the refugees were unrealistic and claims of bribery and ill-treatment insincere.

However, UNHCR, expressed its concerns after the protest and called for restraint, dialogue and a peaceful resolution to the situation.

“We regret that, despite our continuous efforts to engage with and offer solutions to protestors, the situation has deteriorated over the past 48 hours, with some refugees blocking roads and coming into a direct physical confrontation with a small number of police officers,” Fathiaa Abdalla, UNHCR’s Representative in Kenya said.

The UN body insisted its staff have been in regular contact with the group to understand their grievances and address them, and to offer its assistance.

“We will continue to closely follow events. We urge the group to stop preventing other refugees, some in a very vulnerable situation, from accessing our premises and receiving the counselling, protection and assistance that they need. We really hope that the violence of a few will not negatively impact the many other refugees living in Kenya,” Abdalla added.

Post a comment
WATCH: The latest videos from the Star
by RAMADHAN RAJAB Political Writer
News
11 May 2019 - 06:00
Read The E-Paper