The proxies approach judicial officers with mouthwatering deals in exchange for lenient rulings for their offences.

• DCI says in a confidential report claims that a number of judicial officers are linked to known drug traffickers. 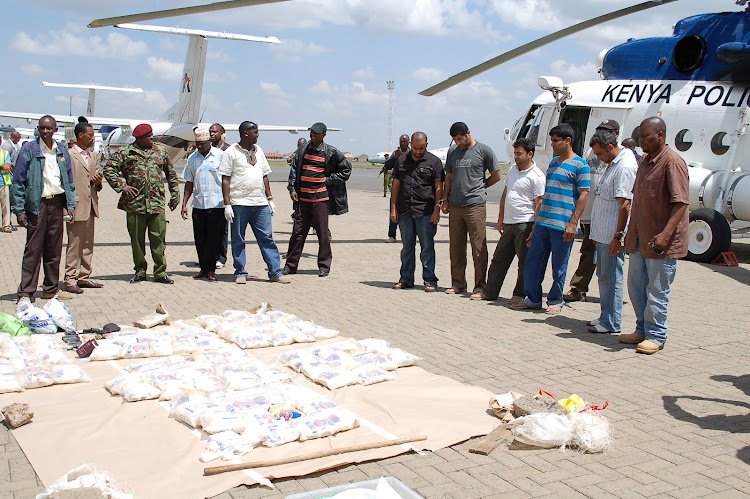 Rampant corruption in the judiciary is frustrating efforts of a multi-agency task force charged with the responsibility of ridding the country of narcotics, a new report shows.

The report, a product of months of investigations, put the courts on the spot, amid allegations that drug dealers approach judicial officers with mouthwatering deals to get lenient rulings.

Coupled with the challenge at the courts is complicity by police officers who collude with drug lords to help the latter evade arrest.

The Directorate of Criminal Investigations says in the confidential report obtained by the Star, that dozens of judges and magistrates are under investigations over close links to known narcotics traffickers.

“Drug traffickers using proxies have worked their tentacles into some state agencies responsible for battling the vice,” the report reads in part.

The report also claims that proxies approach judicial officers with mouthwatering deals in exchange for lenient rulings for their offences.

Kenya is a major target market for heroin but other narcotics also find their way through its porous borders.

More alarming is that the dealers are targeting schoolgoing children as rogue officers “are in bed” with the dealers, at times directly or through proxies.

The police also blame the courts for issuing bail terms that suspects pay within days, hence can manoeuvre to have their businesses run uninterrupted.

A recent case involved two police officers (names withheld) who were charged with stealing 25 kilos of heroin they were meant to arrest.

The cops, the report reveals, have been distributing the drug through a secret network that the authorities are yet to unmask.

A further finding is that Kenya still remains an active transit point for drugs to parts of Africa, Europe, and America. 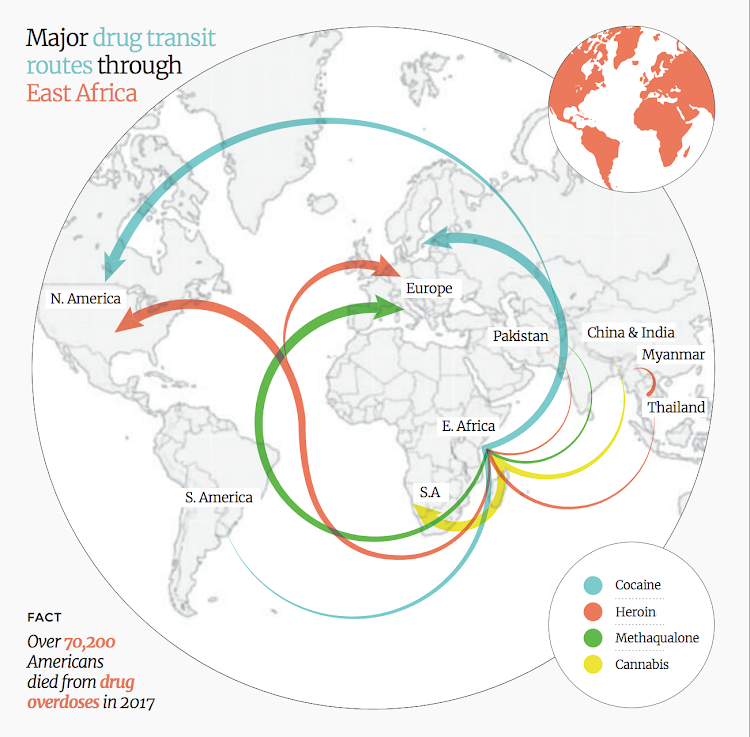 “At the same time local syndicates continue to source drugs from Uganda and Tanzania which they supply locally,” the police revealed.

And in what could shock many, despite the inroads made in weeding out the menace, Kenya is still a host to high ranking members of a drug trafficking organisation.

“The organisation receives bulk heroin in Mozambique and Tanzania from Pakistan which is then distributed to various parts of Africa and Europe,” police revealed.

At the helm of drug trafficking organisations are Iranian and Indian smugglers who purchase heroin from Afghani farmers, “at ridiculously low prices”.

The lot then smuggles it through Afghanistan to Pakistan, famed as the southern route, through the Arabian Sea into parts of Africa.

The smugglers largely work with Nigerian nationals – though have links with movers from other African states, Kenya included, who recruit couriers.

“The groups have established a network that recruits vulnerable individuals in the region to smuggle narcotics to Europe, Asia, and some African countries,” the report states in part.

According to the United Nations Office on Drugs and Crime (UNODC), Eastern Africa is accessible by sea to heroin producer countries in South West and South East Asia through the ports in Djibouti, Eritrea, Kenya and Tanzania.

The ungoverned space in Somalia has made it easier for narcotics to get to Nairobi and Addis Ababa through porous transit routes, at times through JKIA and Bole International Airport.

“Both airports have connections between West Africa and the heroin‑producing countries in South West and South East Asia,” the UNODC says in its website.

“Both airports have connections between West Africa and the heroin‑producing countries in South West and South East Asia,” the UNODC says in its website.

The recruitment process involves targeting potential couriers, training them in concealment methods like ingesting narcotics or use of false compartments in hand luggage.

The couriers are also briefed on how to beat visa processing hurdles, paying for travel and hotel expenses, and smuggling money back upon successful deliveries.

Anti-drugs agency Nacada in 2017 said 18.5 per cent of Kenyans aged 15-65 years are using at least one drug or psychotropic substance.

Heroin, cocaine, bhang, miraa, alcohol, and tobacco are the most abused substances in the country, both in upmarket residences and slums.

More alarming is that deaths resulting from drug overdose are undocumented, hence making it hard for authorities to make competent decisions to mitigate them.

“This paints a grim picture given that the age bracket is diverse and indicates that the problem affects our communities across the board,” the police said.

But there is hope as a multi-agency operation has helped bring many drug trafficking organisations down on their knees.

“Activities of narcotics traffickers – both foreign nationals and native Kenyans, have shrunk. The drug dealing mafia and their ilk are running out of time and space to hide,” the police said.

“It is becoming increasingly difficult for drug traffickers to move their products; this is owing to the increased vigilance by security agencies on land, air, and sea,” the police said.

However, the agencies admit that they are yet to find ways of taming the infusion of dirty money into the country’s economy.

Global Financial Authority - a US NGO, in a report titled “Transnational Crime and Developing World”, said the global market in drug trafficking has an annual global value of between 426 and 652 billion USD.

Narcotics trade is rated the second most lucrative illicit market after that of counterfeit and pirated goods which generate as much as 1.13 trillion USD annually.

A case in point was when the Assets Recovery Agency froze property worth Sh120 million belonging to six major drug dealers in Nairobi and Mombasa.

These included eight vehicles and 21 million in cash seized from four drug dealers in Mombasa.

Over 30 people and over 200 kilos of heroin were recovered in the first quarter of 2019.

The authorities are warning Kenyans, especially airline staff and cabin crew, against being lured into the trade as it would bring down their careers.

Additionally, Kenyan citizens are rotting in jails overseas as far as Asia and Europe with little hope of ever being visited by family members.

Drugs: The Final Frontier In The War Against Corruption

What the drug traffickers found in Kenya is a weak criminal justice system, an easily corrupted police force and judiciary, and an easily ‘bought’ ...
Siasa
10 years ago

President Uhuru Kenyatta on Saturday announced the establishment of a special police unit to deal with corruption and illicit trafficking of cargo ...
News
6 years ago

Special Report: How undercover US spies posing as heroin dealers lured the Akasha's into the police cells

One evening last November, a handful of policemen in Kenya's sweltering port city of Mombasa were handpicked to help in the final stages of a US-led ...
News
7 years ago
Post a comment
WATCH: The latest videos from the Star
by MOSES ODHIAMBO Journalist and Political Writer
News
11 May 2019 - 07:00
Read The E-Paper