This is after the MPs awarded themselves the backdated allowance in the April pay.

•Haki Africa wants SRC to revoke parliamentarians allowances in 14 days or they will go to streets.

•The lobby group has termed MPs' move as theft. 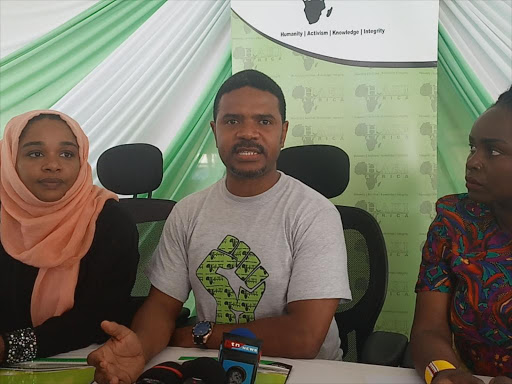 Human rights lobby Haki Africa has given SRC 14 days to nullify new house allowances to be pocketed by MPs or they will hold demos.

Addressing the media in Mombasa on Tuesday, Haki Africa CEO Hussein Khalid said that the move by the MPs is unconstitutional and illegal.

He said that the government did not increase minimum wage for the employees during the Labour Day celebrations due to economic constrains, but parliamentarians have still gone ahead to seek hefty allowances.

“Due to huge debts and increased cost of living, Kenyans were told to tie-up their belts and support austerity measures to support development agenda. Parliamentarians opted not to care, and instead awarded themselves hefty allowances at the expense of economy,” Hussein Khalid said.

This is after the MPs awarded themselves the backdated allowance in the April pay, as each of the 416 MPs received Sh2.25 million over and above their monthly pay.

The lobby group has termed legislatures move as illegal act, calling upon anti graft agencies to investigate individuals behind it and prosecute them.

The group has further called upon Kenyans to rise up and stop MPs from hefty allowances.

But SRC boss Lyn Mengich yesterday told the Star that the Commission is still in the process of confirming if the allowances have indeed been paid before swinging into action.

She said that the commission will do everything to ensure the allowance does not breach the law.

MPs are already entitled to Sh20 million mortgage charged at three per cent.

They have allocated themselves Sh250,000 monthly house allowance.
News
2 years ago