Media calls for a rethink on state advertising agency

• Government defends the agency saying it is meant to control spending. 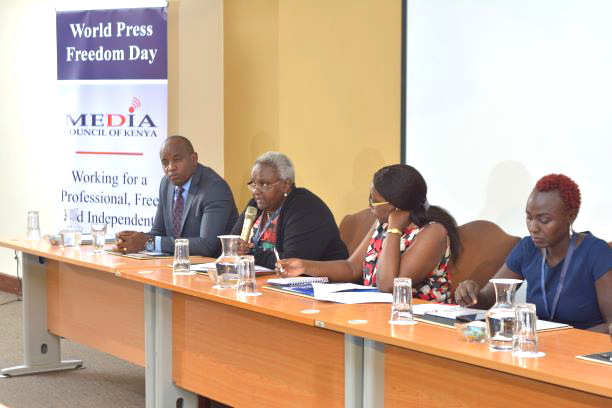 FREE? OR JUST MADE TO BELIEVE SO?: Kenya National Commission on Human Rights chairperson addresses a panel discussion during the World Press Freedom Day proceedings in Naivasha

Kenyan media has called for a review of the Government Advertising Agency's role as they marked this year's World Press Freedom Day.

Journalists believe the agency is doing more harm than good to the independence of the media and accuse the government of intimidating GAA into shaping editorial decisions in newsrooms.

An ongoing two-day gathering of stakeholders organised by the Media Council of Kenya called on the agency to be challenged as unconstitutional.

In a statement, editors said GAA was created in controversial circumstances as a clearinghouse for all public sector ads.

"Today, it has morphed into a master switch that can and has been abused. It arguably is the single biggest threat to editorial independence and sustainability of the media as we sit here today," the statement reads.

In its defence, the government claimed the decision to form GAA was with the aim of controlling state spending on advertising.

"We were spending up to Sh8 billion as different ministries and departments handled their own advertising. We are now saving as much as Sh6 billion annually since the formation of GAA," Information secretary Judy Munyinyi said.

However, this was contested by the industry, with Royal Media Services director of strategy and innovation Linus Kaikai saying recent developments did not show this to be the case.

"We do not believe there is any money that has been saved. What we have seen is huge debts to the media and people in court being charged for stealing money from GAA," Kaikai said.

Independent media is essential for democracy

Media is not the enemy of the people, even when it reports news that could be uncomfortable.
Opinion
3 years ago

This was during a plenary session to discuss the role of the media in relation to national values.

Kenya National Commission on Human Rights chairperson Kagwiria Mbogori supported the calls by the media to have GAA's role reviewed.

Mbogori said it was important that the role of the agency is reviewed with the aim of ensuring it does not infringe on the rights of journalists and the media.

Earlier, Media Council of Kenya CEO David Omwoyo said there was a need to safeguard the independence and freedom of the media at all times.

Omwoyo said the media should work in solidarity to protect press freedom and as well as in addressing issues affecting journalists and media industry.

He also said it was unacceptable that there are some state players working to interfere with how the media works.

"There is an incoming risk where strangers oscillate between our ministry and Interior claiming to regulate media, thereby amounting to a violation of the Constitution, human rights and bringing confusion," Omwoyo said.

Post a comment
WATCH: The latest videos from the Star
by OLIVER MATHENGE Digital Editor
News
04 May 2019 - 05:00
Read The E-Paper