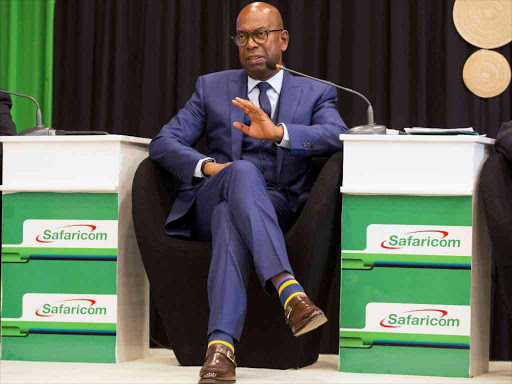 While announcing the results on Friday for the year ending March 31, CEO Bob Collymore said the Telco's earnings before income tax grew 13.1 per cent to Sh89.6 billion even as the firm faced a number of challenges ranging from  shrinking consumer wallet, increased taxes and the need for control and affordability.

“We are pleased with the strong results we have delivered for the year, building on our long track record of delivering relevant products and putting the customer first. We foresee continued growth in the future,” Collymore said.

The CEO who presented the results after having missed last year's event due to poor health said Safaricom was ready for fair competition on a fair play playground where investment and innovation are the true differentiator.

"We have grown past the battles between the banks and telcos...it's time we talk on collaboration," Collymore said.

Collymore said the firm's credit facility, Fuliza, has had an incredible uptake since its launch three months ago with customers having borrowed Sh45 billion to date.

According to Collymore, the facility has since seen a total of Sh29 billion completed transactions over the period under review.

So far,  8.8 million customers have opted into Fuliza, with 4.4 subscribers having opted in in the first month alone and borrowed Sh6.2 billion.

Collymore said Safaricom's customer base now stands at 31.8 million out of over 49 million mobile subscribers in Kenya.

Collymore, however, said there has been a slowdown in the uptake of mobile data where marginal growth of 6.4 per cent was experienced during the period under review compared to 24 percentage growth recorded in 2018.

Following the net income growth, the firm proposed to spend Sh50.08 billion on dividends at a cost of Sh1.25 per share.

Safaricom further proposed to pay out Sh24.84 billion on special dividends at a cost of 0.62 cents per share.

Collymore said Safaricom will pump over Sh36 billion to double its 4G network coverage to 5000 base stations by March 2020.

This, he said, will cover all major towns and 80 per cent of Kenya's population.

“For a majority of Kenyans, the mobile phone is often the first and only link to the Internet. We aim to ensure that no one has to miss an opportunity or get left out because of lack of access to affordable, quality, high-speed broadband,”  Collymore said.

Post a comment
WATCH: The latest videos from the Star
by ABEL MUHATIA AND EMMANUEL WANJALA
News
03 May 2019 - 08:42
Read The E-Paper