Rotich: 61 per cent of your tax will go to debt repayment from July

Half of the expected total revenue collection including appropriation-in-aid of Sh2.1 trillion during the financial year will be spent on loan repayment.

Kenya’s annual debt obligation will in 2019-20 cross Sh1 trillion for the first time in history, exerting more pressure on the country’s fiscal plan.

According to the Budget Statement for 2019-20 presented to Parliament by the Leader of Majority Aden Duale on Tuesday, the country is expected to spend Sh1.1 trillion to repay loans, of which Sh366.4 billion will be interest.

The report shows the government will incur interest of Sh215.4 billion on domestic debt and a further Sh150.9 billion on external loans during the year.

Kenya sources most of its infrastructure funding from China, a trend that has seen the Asian nation beat traditional lenders from Europe to become the country’s most reliable financial partner.

Currently, China leads in the list of external creditors by 22 per cent followed by World Bank at 20 per cent; ISB (19 per cent), commercial banks (14 per cent), African Development Bank (8 per cent) with the rest by Japan.

The first five-year tranche of Sh200 billion Eurobond taken in 2014 that matures in July will attract interest of Sh14.5 billion. The state will also incur interest of Sh40 billion for undisclosed ‘new loans’. 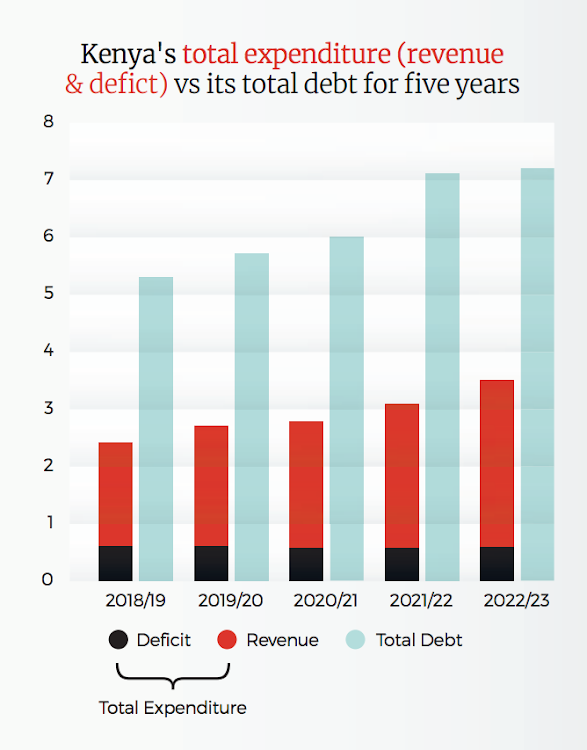 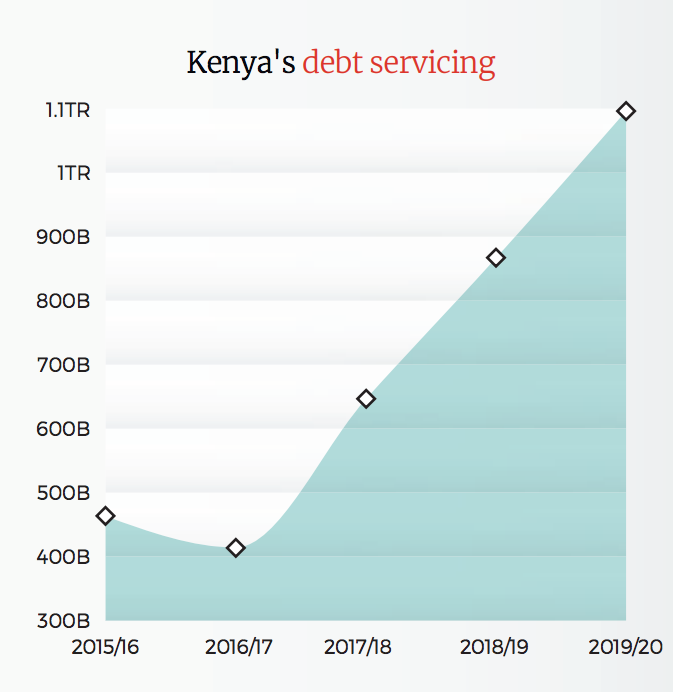 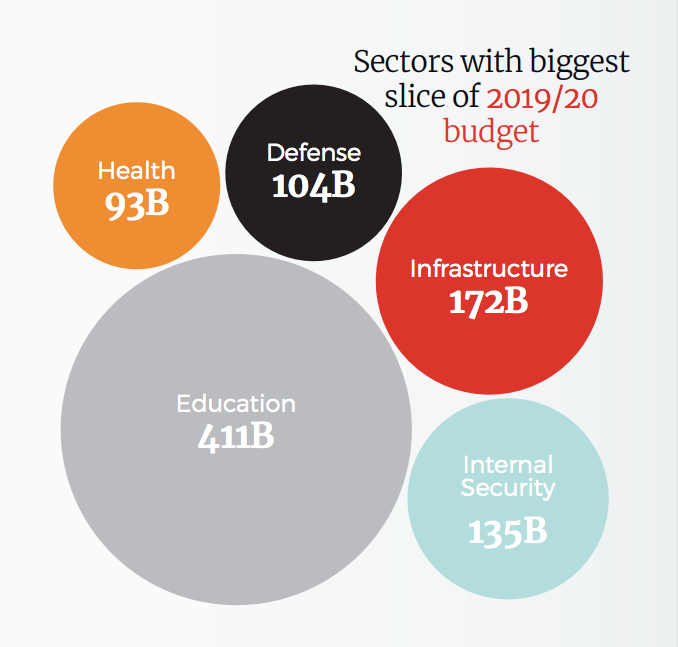 The country’s debt obligation is rising amid sustained outcry by the public and the international community.

Taxpayers were from September last year forced to incur the rising cost of debt when President Uhuru Kenyatta signed into law the Finance Bill, 2018, introducing new taxes and hiking existing ones.

The government did this ostensibly to crowdsource Sh870 billion expected to service public debt this financial year.

Among other things, it introduced eight per cent Value Added Tax on petroleum products, a 1.5 per cent levy for the National Housing Development Fund and kerosene adulteration tax.

He also imposed Sh20 per kilogramme of sugar confectionery, including white chocolate, increased excise tax on cash transfer from 12 per cent to 20 per cent, and that of calls and data from 10 to 15 per cent.

By spending Sh1.1 trillion on debt servicing, the government will have technically used 61.1 per cent of expected ordinary revenue estimated at Sh1.87 trillion, leaving only Sh770 billion.

It also means that half of the expected total revenue collection including appropriation-in-aid of Sh2.1 trillion during the financial year will be spent on loan repayment.

The country’s total expenditure for the year is expected to rise to Sh2.76 trillion from Sh2.5 trillion this year, salaries and other recurrent expenditures gobbling up Sh1.7 trillion.

Taxpayers were from September last year forced to incur the rising cost of debt when President Uhuru Kenyatta signed into law the Finance Bill, 2018, introducing new taxes and hiking existing ones.

The government did this ostensibly to crowdsource Sh870 billion expected to service public debt this financial year.

It estimates to spend Sh691 billion on developments which will mostly be funded by project loans and grants from development partners and external loans, accounting for 25 per cent. This is below the 30 per cent threshold set by the International Monetary Fund.

This is likely to force the government to borrow more to plug the budget deficit, pushing up the country’s public debt that currently stands at Sh5.3 trillion, according to latest update by the Central Bank of Kenya.

Although the Medium-Term Fiscal Framework presented to Parliament shows the country’s fiscal deficit will ease marginally to Sh607.8 billion next year compared to Sh608 billion in the current financial year, a total of Sh613.5 billion will be borrowed to plug the deficit.

"The fiscal deficit for 2019/20 will be financed by net external financing of Sh324.3 billion, domestic borrowing of Sh289.2 billion and other net domestic receipts of Sh5.7 billion,’’ the National Treasury report said.

According to the report, Treasury is targeting the budget to drop to 5.6 per cent compared to 6.1 for the current financial year that was revised upwards from 5.8 per cent. It expects to lower it further to 3.8 per cent by 2022/23.

However, the total expenditure budget is expected to rise every year to hit Sh3.57 trillion by the time President Kenyatta leaves the office in 2022.

Perhaps more chilling is the total public debt that is expected to rise to Sh5.7 trillion next year before jumping to nearly Sh7.17 trillion in the year ending June 2022.

According to a plan by Treasury, debt servicing obligation is expected to rise in the next three years as more loans mature.

Cumulatively, President Kenyatta's government will have borrowed Sh2.13 trillion in more national debts by the end of his final term in August 2022.

Even so, Treasury insists that Kenya continues to face a low risk of debt distress, as it remains below the threshold of 74 per cent of GDP in net present terms.

Data released by the Institute of Economic Affairs on Wednesday last week shows that in 2017, 2018 and 2019, Kenya’s debt service to revenue ratio stood at 35.8 per cent, 30.5 per cent and 33.4 per cent respectively against the threshold of 30 per cent.

Last week, the director of debt policy at the National Treasury Haron Sirima downplayed the country’s debt situation, saying it is sustainable as it has not exceeded the 74 per cent sustainability level.

In October last year, the IMF said Kenya’s risk of defaulting on debt repayments had increased to moderate from low, citing the government’s public investment drive and revenue shortfalls in recent years.

According to the Annual Public Debt Management Report 2018 by Parliament, the growth in Kenya’s debt over the years has been on account of little improvement in the budget primary deficit, increase in debt service payments, yearly revenue shortfalls and weak commitment to fiscal consolidation over the medium term.

The Parliamentary Investment Committee workshop meeting in Mombasa over the weekend also added its voice to the growing concerns about surging public debt.

The situation is not a good signal for the economy, Kiriga said.
News
1 year ago

The MP was concerned that most of government borrowing is going towards recurrent expenditure with some being looted, leaving little for development.

He called for a stronger Debt Policy, Strategy and Risk Management, known as the Middle Office, to give it powers to tame the burgeoning debt.

While expenditure budget has been rising, revenue collection has been dwindling, with the Kenya Revenue Authority consistently failing to meet allocated targets in the past three years, forcing the government to borrow more.

This casts doubt on the agency’s ability to achieve future targets including Sh1.8 trillion set for next year.

In March, KRA commissioner general John Njiraini told the Parliamentary Finance Committee that the agency was behind collection schedule by Sh55 billion and projects to miss this year’s  target by up to Sh110 billion.

This is even after Treasury revised KRA’s target downwards by five per cent in September to Sh1.605 trillion from Sh1.69 trillion.

The government is however confident that tax policy measures through the tax amendment law and Finance Act 2018 will enable it to achieve the set target.

"The government has moved to strengthen tax administration so as to seal loopholes and safeguard revenue base under Revenue Enrichment In initiative (REI) programme being implemented by KRA,’’ Treasury said.

Recurrent expenditure  is expected to account for 78.9 per cent of the budget.
Business
1 year ago
STAR COMMUNITY POLICY AND PARTICIPATION GUIDELINES
by VICTOR AMADALA Business Writer
News
02 May 2019 - 07:00