• Moi described Jonathan as a caring and dedicated son who was enthusiastic in many ways.

• Moi said that Jonathan's great passion was farming and rallying. 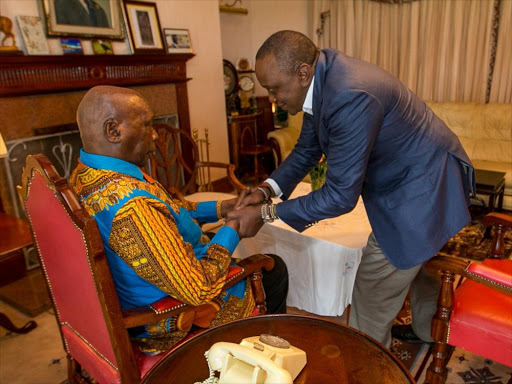 Moi described Jonathan as a caring and dedicated son who was enthusiastic in many ways.

"Others knew you as a rally driver, a farmer, JT while to me, you were my son. I have lived my life to the fullest and no father should bury his son but vice versa. I'm happy God chose you to be my son," said Moi.

Moi said that Jonathan's great passion was farming and rallying.

"He had a great passion for farming, that came from me, but rallying, I don't know 'He described him as a kind, uncomplicated person," he said.

Moi added, "The happiest moment for any parent is to know his child has given his life to Christ.  This is the great comfort to know that my son had made space with His maker."

"Jonathan will meet with his Mama, relatives, and friends. We will clothe you with prayers, we will take care of those you have left behind," the former President said.

He added" you made mistakes, you were not perfect. I loved you. I hand you over to God, your maker."

Gideon on his part said that he was saddened with the loss of his brother Jonathan.

"We have come here to stand with you and tell you Jonathan was your kin buy our friend too. I met him during YK92, he was a very simple and down to earth. He had a home in Eldoret and many friends in Eldoret," Ruto said.

President Moi has many sons and daughters brought up my Mzee Moi. We have come here as sons of President Moi. He has nurtured us in many ways including politically.

He added, "We have known him as a businessman, farmer and a rally guru. We will continue to stand with u and pray with you."

The DP urged Kenyans to go for cancer screening.

"Cancer has killed many people, it is a big challenge in our nation. It is a condition that can be managed and treated if detected early. On a regular basis, we need to be going for screening," he said.

He urged counties to ensure the cancer equipment in counties are utilised fully and sensitisation on cancer is done.

"Jonathan accepted God. Despite our political differences, we will be happy when leaders unite and accept God in their lives,".

Wycliffe Oparanya, the Chairman of Council of Governors, Senate Speaker Kenneth Lusaka, Kipchumba Murkomen the Senate Majority Leader, Kalonzo Musyoka, Musalia Mudavadi, are among the over 50 political leaders who attended the funeral service.

Family sources indicated that Moi 95, will not attend his son's service at Kabimoi.
News
2 years ago

Uhuru visits Moi at Kabarak after death of Jonathan

The President upon landing, was received by Baringo Senator Gideon Moi.
News
2 years ago