Critics however dismiss his bid as futile 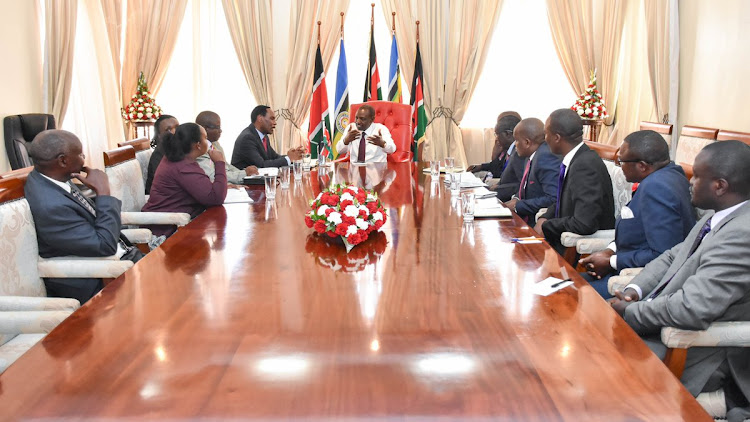 Deputy President William Ruto is aggressively expanding his political base as he's worried that President Uhuru Kenyatta’s Central backyard will not back him for president.

Ruto has trained his sights on the vote-rich Western and Coast, both previously seen as Opposition chief Raila Odinga’s bastions.

Analysis by the Star indicates that since October last year, Ruto has made at least 15 trips to Western, mainly in Kakamega, Bungoma and Vihiga counties.

The DP, a teetotaler and a workhorse, has also been hosting delegations from Western and Coast for strategy meetings as part of his wider charm offensive for 2022.

Ruto’s latest visit to Western was last Sunday when he attended a church service at the Salvation Army in Kakamega town.

The DP gave  Sh5 million during the church fundraiser.

Apart from Coast and Central, Ruto is plotting for a firm grip on Northeastern and wants a lock on the  Masaai vote in Kajiado and Narok counties.

Ruto’s think tanks believe the populous Luhya vote and the Coastal communities would guarantee him a decisive victory.

Will Ruto, Raila reunite ahead of 2022

Fierce rhetoric is no evidence the two cannot turn around and shake hands.
Siasa
3 years ago

But most importantly, it’s a backup plan for the restive Mt Kenya vote bloc. Key leaders in the region have publicly said Ruto is not fit to occupy State House.

Belgut MP Nelson Koech, a close Ruto ally, said any serious politician with ambition to lead the country should build “friendship with other regions”.

Koech maintained, however, that Ruto’s new forays should not be interpreted to mean he has given up on the Kikuyu vote basket.

“You should remember that presidential victory is 50+1 per cent of votes cast and the DP is approaching all corners of this country for that support. But I think right now he is keen to ensure that the Jubilee manifesto is rolled out,” Koech told the Star.

The DP, not too long ago a darling of Mount Kenya, is now on shaky ground with ex-Jubilee vice-chairman David Murathe and a host of legislators spearheading a radical Stop Ruto campaign.

They claim Ruto is openly sabotaging Uhuru's leadership by defying his cohesion agenda manifested by his political truce with Raila.

You should remember that presidential victory is 50+1 per cent of votes cast and the DP is approaching all corners of this country for that support. But I think right now he is keen to ensure that the Jubilee manifesto is rolled out

The leaders also depict Ruto as the beneficiary of grand corruption.

On Monday, the Kikuyu Council of Elders openly stated that the community would only back a presidential candidate who will have supported President Kenyatta to fulfil his pledges.

“You cannot be going around the country insulting the President, then expect support from the community,” the council’s national vice-chairman David Muthoga declared. He was firing a broadside against Ruto's Tanga Tanga team.

The Council has previously said Ruto should retire in 2022.

The region probably has the largest population of unregistered voters, making it a fertile ground for politicians.

“A presidential candidate does not sit and wait, they move around asking for votes…Look, he [Ruto] camped in Bungoma in the last election and see what he managed to get to Jubilee. His determination to win hearts in Western region is what is giving him added advantage," he told the Star.

In the last election, Jubilee won eight parliamentary seats in two of the Luhya-dominated counties.

Over the weekend, Atwoli said Ruto would not be on the ballot in 2022, triggering a fight with the DP’s lieutenants

Yesterday, Kakamega Senator Cleophas Malala said Ruto’s frequent trips to Western will result in naught and he will “see dust” when the time comes.

"The DP is dancing alone before the music is played. Nothing to worry about,"  Malala said.

However, Mumias East MP and Jubilee Chief Whip in the National Assembly Benjamin Washiali said the Luhya nation had decided to embrace Ruto because of his "good leadership skills and development consciousness".

He said Ruto "has the gift and ability to make friends".

"If the presidential election were called today, I can bet the DP would carry the day. People on the ground are supporting him," he told the Star on the phone.

Ruto has also made whirlwind tours of the Coastal counties, showing a keen interest in Kilifi, Taita Taveta and Kwale counties.

Some MPs and governors in these counties who were part of Nasa have been warming up to the DP.

Ruto’s overtures in the region got a boost when Malindi MP Aisha Jumwa of ODM among other lawmakers threw her weight behind the DP.

Kilifi Governor Amason Kingi, who has been one of Raila’s key point men in the region, has also signalled he could work with Ruto.

Ruto's trips to Western have been telling. He sometimes visits twice each month.

For instance, he was in Kakamega on Sunday. However, last week on Friday, the DP was in Bungoma for the National Drama and Film Festival.

On March 30 he attended a function by One Acre Fund in Lurambi constituency in Kakamega. On February 17 he was in the same county for a harambee at Christ the King Catholic Church, Amalemba.

On March 29, the DP he laid a foundation stone for construction of  Dr Maurice Dang'ana Secondary School, Hamisi, Vihiga county.

On February 28, the DP was the chief guest during the thanksgiving events for two MCAs, John Chikati and Bethwel Mwambu, in  Tongaren constituency, Bungoma county.

Four days before this, he had held a closed-door meeting at his Karen office with Kakamega county leaders headed by Governor Wycliffe Oparanya and a host of MPs, mostly from ODM.

On January 2, at his Sugoi home, he also held met leaders from Busia and Bungoma counties led by Busia Governor Sospeter Ojaamong.

In December last year alone, the DP made five trips to Western. On December 31, he was in Ikolomani where he met women grassroots leaders and later watched a football match at Matungu.

On the same day, he attended the annual bullfighting festival at Malinya stadium where he presented 10 heifers to the best performers

On the 23rd of the month, he attended an interdenominational church service at Likuyani. Three days earlier met leaders from Western at his Karen office.

In the same week, he was in Ikolomani constituency to lay the foundation stone of Kenya Medical Training College.

On December 15 he attended the 25th anniversary thanksgiving ceremony of Father Pius Lukhale, diocese of Bungoma at Mabanga, Bungoma county.

Ruto has also made whilwind tours of the Coastal counties, notably  Kilifi, Taita Taveta and Kwale.

Most MPs and governors in these counties, mostly elected on ODM tickets, have warmed up Ruto and are backing his quest for the presidency.

On March 9, Ruto toured both Mombasa and Kilifi counties