State 'won't' switch your phone off over Huduma Namba

• The government has denied claims that it would switch off simcards of Kenyans without Huduma Namba.

• tate House chief of Staff Nzioka Waita said there was no such directive. 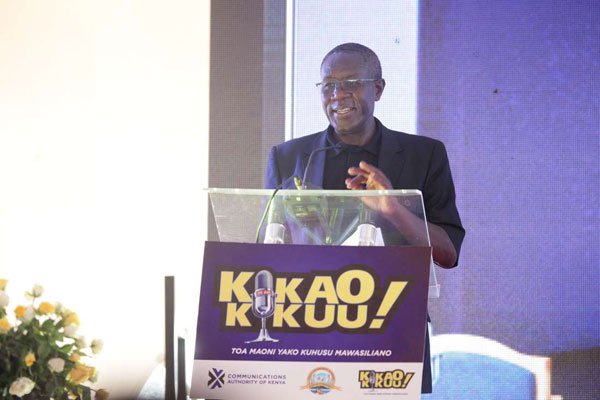 The government has denied claims it plans to deregister SIM cards of Kenyans who fail to register for Huduma Namba.

Earlier on Thursday, the Communications Authority had threatened to switch off the phones of those who will not have registered by May 8.

Among the punitive measures suggested by the authority making one unable to use his or her mobile phone, access to M-Pesa, Airtel Money and make ATM withdrawals.

Registration for Huduma Namba is ongoing and runs for 45 days with the deadline being May 17.

But State House chief of Staff Nzioka Waita said there was no such directive from the government.

“For the avoidance of doubt, Huduma Number Registration is a voluntary exercise in compliance with the ruling of the courts. There is no directive from the Government to institute any punitive measures against those who don’t register. More emphasis will be laid on civic education!,” he said on his twitter handle.

Wangusi, while addressing delegates attending the ICT week celebrations in Kisumu dubbed Kikao Kikuu, said once the exercise comes to end, the authority will liaise with the telephone service subscribers to help them deactivate all telephone numbers of defaulters.

''We are taking stock of registration and by the time the exercise ends, we shall ask the service providers to deactivate all numbers and register them afresh,'' Wangusi said.

The digital listing programme was launched earlier this month by President Uhuru Kenyatta but the government was barred by the High Court from forcing Kenyans to register.

The High Court also barred the government from using the data to withhold any services or bar anyone from accessing public facilities.