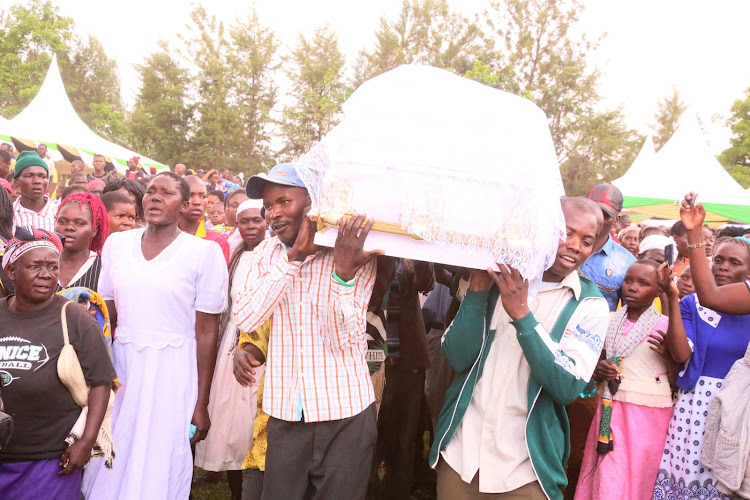 Ritual took centre stage during the burial of Everlyn Namukhula, the mother of the quintuplets born at Kakamega County Referral Hospital a month ago.

Two of them died, both boys, then their mother died.

The 28-year-old Namukhula was buried on Wednesday at 3.30pm in a small village in West Bunyala ward of Navakholo constituency. The burial followed a Christian ceremony conducted by a local church.

The grave was on the right side of her new three-bedroom semi-permanent house.

Besides her grave, were two small unmarked graves of two of her babies who died in Eldoret.

The two were buried at midnight on Tuesday in an elderly-men-only ceremony conducted by elders of the Batsotso and Banyala subtribes.

Nanzushi was forbidden to attend the burial rites of his children and wife to appease the spirits and cleanse the home, David Munyanya from the Banyala subtribe said. The widower and father was expected to return home at dusk.

Elders pulled him out of the procession to the graveside barely two kilometres from the homestead and taken to a hideout.

The elders explained that for the widower to survive, he should not get close to his wife’s open grave or else he invites a curse that could result in sudden death.

Namukhula’s funeral procession spread out over the homestead and the graves of the two babies were trampled. To Munyanya, that was a blessing as the graves are not supposed to be identified.

Luhyas say that a dead person is a king because everything is done for him as he lies in state.

This applied yesterday to Namukhula. Her home had visitors of diverse backgrounds, many who never thought they would ever set foot on Kamulu village.

The home was on an almost impassable track when she left for Navakholo hospital from where she was referred to Kakamega referral hospital. Yesterday it was gravelled by of the Kakamega county government.

A new three bedroom semi-permanent house had also been built for the family.

The mood was doleful in Kamulu village as the body of the mother of nine arrived on Monday night.

Police had difficulty controlling the emotional crowd intent on having a final look at the remains of the woman who had gained recognition after the birth of quintuplets. Two of the five babies were buried on Monday night according to the Banyala traditions.

The widower, who is mute, was overwhelmed by emotions.

Namukhula gave birth to quintuplets at Kakamega County Referral Hospital a month ago. She was transferred to the Moi Teaching and Referral Hospital Eldoret, three days later after two children developed breathing complications.

She passed on April 7 while undergoing treatment at MTRH.

An autopsy showed that she succumbed to weakness of the heart muscles, a condition known as peripartum cardiomyopathy.

The condition happens during the final month of pregnancy through five months after delivery.

The county government of Kakamega met the entire cost of the funeral that was televised by some local stations.

Muhanda promised to take care of the remaining three children until they are fully grown as a sign of her respect for Namukhula. “I will ensure they get a good education since they will be like my own children,” Muhanda said.

Wangwe said he had lost an industrious woman who was dedicated to taking care of her family despite the many challenges she faced.

“Namukhula was the breadwinner of the family since her husband is mute and unemployed. As leaders, we will stand with the family and ensure the children who are already in school continue with their education,” Wangwe said.

Governor Oparanya said the county government will pay the entire hospital bill at the Moi Teaching and Referral Hospital. The other three babies, girls, are still under the care of doctors until they reach 18 months, when they will be discharged.

“To ensure the widower takes care of the children in school, the county government has recruited him to join the Kakamega County Youth Service. He will be issued with his employment letter next week,” Oparanya said.