NO RAINS IN APRIL

• Met also predicts some isolated storms that may cause flash floods in low lying areas early next month. 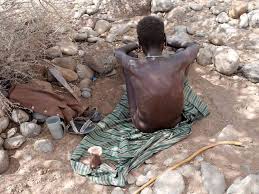 A sick man in Turkana sitting outside his hut.
Image: FILE

Shortages of food and water are expected to worsen as the 'March to May' long rains — well over a month late already — appear in no hurry to fall. There may be little to no significant rainfall in May.

That's the word from the weatherman who says brace for a hot and dry Easter.

That means famine and thirst, sick and dying people and livestock. People are begging for food, water, fodder and livestock uptake before it's too late.

Almost no crops planted, the harvest is likely to be one of hunger.

The forecast released on Saturday by the meteorological department shows that most parts of Kenya will have no rain for the rest of this month.

The scant rain that hit some patches of the country may also end in May.

"Dry conditions are expected to dominate most parts of the country leading to further deterioration of food security and water resources," the Met said.

March to May is the most important season, normally known as the 'long rains season'. But these are not normal times.

"The month of May marks the end of seasonal rains over most areas apart from the Western and Coastal strip where the rains go into early June," the Met forecast for April and May said.

However, the forecast is not all gloomy all over. The Met also predicted some isolated storms (good) that may cause flash floods (bad) over low-lying areas early next month.

Further, the Western and Coastal strips may continue to experience isolated rainfall in a few places to the beginning of June.

"The rainfall is expected to be characterised with long dry spells in between episodes and the amounts are still expected to be minimal," the weatherman said.

The Met said analysis of the rainfall received to mid-April falls "disappointingly" below the long-term average for the period.

The projected scattered rains in May and June will not do much. The months of June to August are normally dry in most of the country.

"The months of June to August are normally dry over most of the country," she said.

It has never stayed for this long without rain. We are in the middle of April without rain and this is not good for food production.

However, Western parts of the country will receive significant rains in August.

Chief meteorologist  Patricia Nying'uro told the Star the long rains are usually pushed into Kenya by high pressures in the southern African region.

"The Inter-Tropical Convergence Zone is the main climatic feature that brings rainfall to Kenya.  Pressures push it from the south coming into the north," she said. But Cyclone Idai sucked up all the moisture, leaving little for the Horn of Africa.

Currently, there is low pressure in the south, meaning only a little is being pushed into Kenya.

The forecast means that farmers who had already planted early this month are likely to lose their seeds.

Kenyan farmers plant about 35,000 tonnes of maize seeds every year

Almost 80 per cent of the farmers' plant with seeds saved from the previous harvest or obtained from community seed banks.

This year, the harvest will drop dramatically.

The National Drought Management Authority says the drought is worse than in 2011. Some areas have experienced the failures of three rainy seasons in a row.

He said with poor seed germination, there will be poor harvest because many farmers could lose their seeds.

Tuimur warned if the country does not receive good rains by next month, the country will have less than 50 per cent maize production.

“Any maize planted from now will have a drastic yield reduction. Farmers are likely to shift to wheat because it does not require a lot of rain. They may also shift to pasture and early-maturing crops,” he said.

Tuimur said the country may not hit  40 million bags of maize harvest, as anticipated for the long rains season.

“We cannot get this now. Even for those who have planted by now, there is wilting and little germination. This means we need to invest in irrigation, rehabilitate old dams and encourage people to do irrigation even if they reduce the acreage,” Tuimur said.

Timothy Njagi from the Tegemeo Institute confirmed that this is going to be a bad year for maize farmers.

“Unless the weather predictions change, this is going to be a terrible year. The country relies on harvest for this long rain season and the lack of rains will have an effect on this,” Njagi said.

Kenya has 21 million bags, most of them still with the farmers
News
2 years ago