• Kenya among countries with highest levels of femicide or deliberate killing of women.

• Jealousy is said to be the main cause. 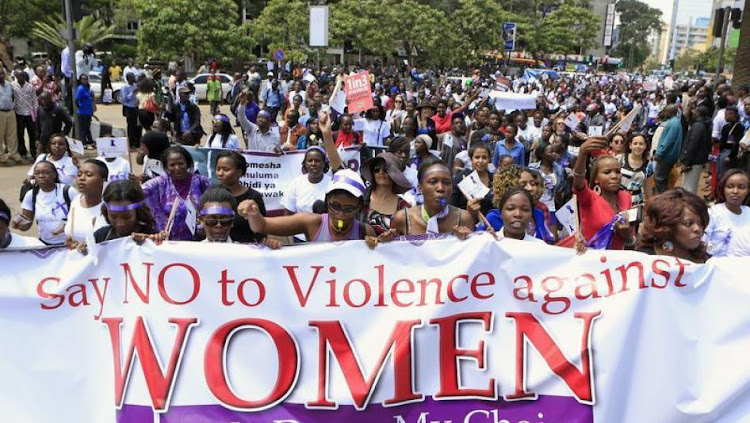 FEMICIDE: Kenya is among countries with very high numbers of murders of women and gender violence
Image: Courtesy

Kenyans on Twitter took to the hashtag, #StopKillingForLove to share condemnation following the rise in murders of women by ex-lovers, husbands, boyfriends and stalkers.

This week alone has seen many crimes against women.

Many Kenyans said nothing can justify murdering someone. Some said there's no such thing as killing for 'love', calling it an obsession.

“Fellow, no matter what she does, nothing on this earth justifies murder. These women were created for us to love and take care of them and certainly not to end their precious lives,” tweeted Mbayagi.

“No matter what you two are going through, murder should never cross your minds. Tr  solving your problems before such thoughts trickle in,” Kalekah said.

“Even if the story has 27 sides, none of them justifies murder,” Mannuel tweeted.

“If you kill someone you supposedly love in the name of Love, that is NOT love. That is Obsession and a Psychopathic mind. You need Jesus,” Wanga tweeted.

“Love is beautiful. What kills isn't love. It's obsession. Inability to let go. People don't want to see their exes happy with others. Women are not investments for profits. Neither are men. Get your own money everyone,” Maggy said.

Miguna tweeted, “We are mistaking [murder] for a love [killing], the same way we mistake [looting] for [corruption]. Kenyans must first learn to understand what the [problem] is. This is our biggest problem; that we don't even identify the problem [correctly]. We want to play it [safe].”

Some Twitter users suggested that the root cause of the rise in murders is mental health issues that haven’t been addressed.

“If you look at the Recent Trend among the Youths, it's very alarming and sad. From committing suicides, to the killing of partners. It is a very worrying trend which can be associated with Mental Health. The government should act very fast. We are losing many lives,” Bravin said.

Kevin tweeted, “We need to open up and talk about our issues as men because the common denominator is depression that [leads] someone to do this. If I come to you as a fellow man, listen to me. If I cry, don't judge me, offer me a shoulder wanaume tupendane.”

Others offered their advice on how this issue should be tackled.

Twitter user Titan said, “listening to both sides of stories will help tackle the issue...not condemning the purported wrong.”

#StopKillingForLove Man was made to suffer and woman to feel the pain. Make a man suffer by conning him out of money and you will feel the pain when the axe says hello.

In a report published by the United Nations Office on Drugs and Crime in 2018, Kenya was shown to among countries with the highest cases of female homicides.

The 2018 'Global Study on Homicide: Gender-Related Killings of Women and Girls' showed women are far more likely to die at the hands of someone they know.

The report stated that jealousy and fear of abandonment were among the prime motives.

Suspect in Ivy's murder to appear in court today

Women in Africa are at the greatest risk of being killed by their intimate partner or family members, the latest report by United Nations Office on ...
News
3 years ago
by Meera Pattni
News
16 April 2019 - 13:46