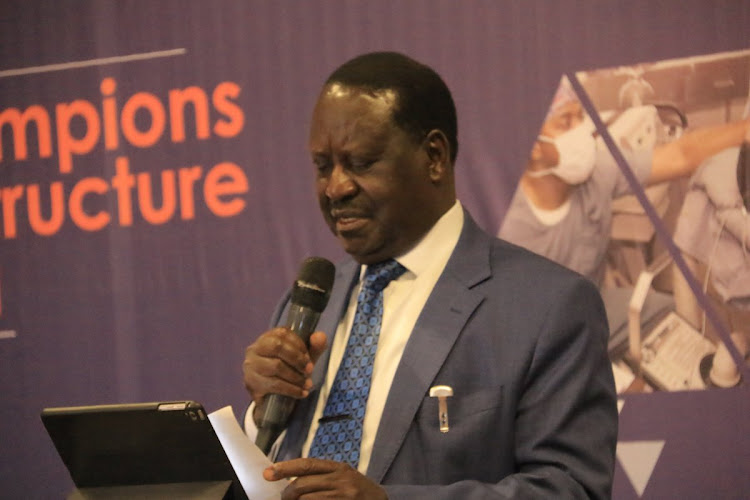 AU envoy Raila Odinga has asked African governments to be cautious about borrowing from abroad.

Raila said African nations including Kenya should think first what they can do with their own resources before turning to international donors.

“We are here to think about what we can do for ourselves as Africans before we go to the World Bank, EU or to the Chinese,” Raila said.

He was speaking in Nairobi during a summit on infrastructure financing in Africa on Tuesday.

Raila said Africa needs to come up with a new transcontinental corridor to connect the eastern, western and central countries to the deep sea ports of Lamu in Kenya and Duala in Cameroon.

"The continent needs a high speed freight railway, which would have a tremendous impact to the economy," he said.

Raila said trade within Africa will only be successful if proper infrastructure is put in place.

Asian and European countries are streaming into Africa to invest in various sectors including improvement of infrastructure.

Last month, French President Emmanuel Macron promised to support President Uhuru Kenyatta’s Big Four Agenda. He will also help in the construction of a commuter rail service from JKIA to the city centre.

REGINALD NALUGALA: What’s in it for us in new scramble for Africa?

China early this month invited African heads of state for the Forum on China Africa Cooperation (FOCAC) in Beijing. The objective was to strengthen ...
Opinion
4 years ago

The rail is expected to reduce journey to JKIA airport to just 20 minutes
News
3 years ago
Post a comment
WATCH: The latest videos from the Star
by KEVIN CHERUIYOT
News
16 April 2019 - 13:26
Read The E-Paper