• Police request time to get psychiatric examination of suspect

• Parents and victim yet to record statements. 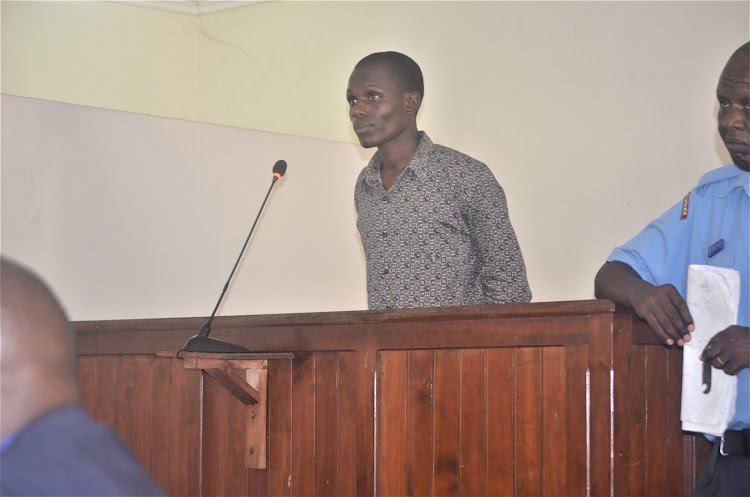 CHARGED: Nicholas Koech, a suspect in the stabbing of Naomi Kipkemoi, in the dock at Kilifi law courts on April 15
Image: ELIAS YAA

Police had asked for ten days to hold the suspect but the magistrate declined.

Nicholas Koech was arrested after allegedly stabbing Naomi Chepkemoi, a Pwani University student he claims is his wife.

Koech did not take plea and will appear in court on Tuesday, April 23.

Investigation officer Evans Kiboi told the court police need time to take the suspect for psychiatric tests, record statements from the victim who is admitted at the Kilfi County Referral Hospital and have the P3 form filled.

“We need to record statements from both the accused and the victim’s families because the suspect communicated with them before and after the act. Both parents hail from Bomet county,” Kiboi said.

The officer said he needs time to extract phone communications between the victim and the suspect.

Koech demanded that the court to allows him see his daughter and the wife.

“Before the case commences, I would like to be allowed to see my daughter and my wife who is admitted at hospital. I also want both parents to quickly address our wrangles which has taken time. They are using delay tactics,” Koech told magistrate Kituku.

The magistrate did not respond to Koech’s demands.

Koech allegedly went to Kipkemoi’s house on Sunday morning and stabbed her several times on the neck, at the back and on the left breast.

The two have been in a relationship and have a daughter.