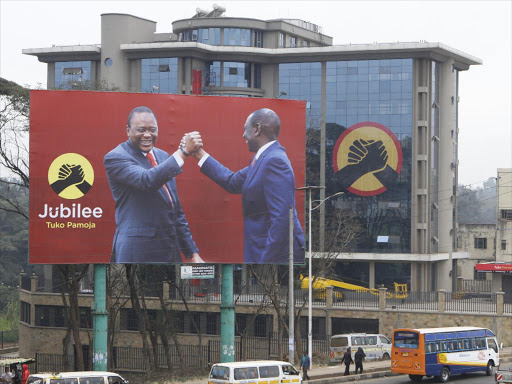 The anti-graft war, the handshake deal and President Uhuru Kenyatta’s unresolved succession puzzle could trigger an implosion in Jubilee, politicians and analysts have warned.

Friction has already erupted in Jubilee with Deputy President William Ruto’s allies crying foul over the renewed anti-graft war which they say is engineered to clip their man’s 2022 wings.

The DP, who has personally raised misgivings with the handshake deal, maintains ODM leader Raila Odinga is interested in wrecking the ruling party following his political truce with President Uhuru.

Walking a tightrope in his bid to succeed President Uhuru, Ruto tore into Raila whom he has accused of working with a section of Jubilee MPs to scuttle his presidential bid.

On the Wajir issue, they say Tuju contradicted the DP who is his boss in the Jubilee hierarchy.
News
3 years ago

On Tuesday, Ruto said some of the Jubilee MPs who were initially in ODM have ganged up with Raila again to campaign against his 2022 presidential bid.

The DP warned that efforts by his detractors to crash Jubilee party will not succeed as the president and he was aware of the wider plot.

“Some of the individuals in the stop Ruto movement were in ODM, others were rejected by Jubilee members. It is a case of sour grapes because when they tried to rig elections we said no,” Ruto said in apparent reference to the team Kieleweke.

The Kieleweke team has been attending Sunday church services mainly in central Kenya and Nairobi in a vicious onslaught against the DP.

They have accused Ruto of attacking the handshake and called him out as the stumbling block to the war against corruption.

But on Saturday Kutuny, a former Raila ally turned Ruto critic warned that the ruling party was on its deathbed because of “arrogance” unless an urgent remedy is found.

"The signs are written on the wall. There is an urgent need for a surgeon to salvage the party," Kutuny said adding that some leaders don't head any counsel."It is about arrogance it is not about if but when," he added.

Political analyst Martin Andati told the Star that Jubilee’s future depends on how it will handle a couple of delicate matters on its way.

“The Jubilee’s future depends on how the party will navigate the succession politics. If the issue is not addressed now then it will pose a major problem,” Andati told the Star.

The analyst said Ruto is facing a delicate balancing act to deal with perceptions that he is curtailing the anti-graft through sheer sabotage as well as position himself as Uhuru’s successor.

Ruto, initially seen as Uhuru’s heir apparent is facing a barreling political onslaught from his critics keen in scuttling his grand march to State House in 2022.

Jubilee party does not belong to one person. It is a national party.

A section of Raila’s allies are pushing the ODM leader into a political arrangement with President Uhuru in 2022 in what could deal Ruto’s State House dream a staggering blow.

Raila’s allies have denounced Ruto as an enemy of the war against corruption and depicted him as a common enemy that must be fought setting the stage for an anti-Ruto campaign agenda.

But the President has maintained studious silence over his succession game-plan leaving the field wide open in what has triggered panic in Ruto’s camp.

However, while Uhuru has repeatedly affirmed his unwavering support for his deal with Raila, the DP’s brigade have launched a scathing attack at the handshake warning it would break up Jubilee.

This cast doubt on Jubilee’s dream for an uninterrupted 20-year-rule.

When it was formed, Jubilee leaders chest-thumbed that the party would maintain an extended grip on power and rule beyond 2032.

With the Uhuru-Ruto allies pulling in different directions regarding the 2022 presidential campaigns and the Head of State's legacy, the boardroom wars and back-stabbings spell doom for Jubilee.

But National Assembly’s Majority Leader Aden Duale maintains all is well within the ruling party:

“Personally, I have worked with the President and Dr Ruto for over 15 years now. As a close confidant to both, I can assure you that all is well at our party. What we are seeing is just divergent political opinion that is common in Kenyan politics. There is no reason for panic,” said the Garissa Town MP.

Duale said the Jubilee party would present the candidature of Ruto in 2022 for nomination as its presidential candidate.

“Delivery of our manifesto and the Big Four Agenda will be our selling point,” he said.

The resignation of David Murathe on January 6 as Jubilee party vice chairman was seen by analysts to signal the beginning of the ruling party’s troubles.

Ironically Murathe, a key Uhuru ally and who represented the president in the Jubilee formation table, declared an all-out war to block Ruto’s presidential bid.

"I now find that it is no longer tenable to stay on as the party vice-chairman. There is no way I am going to sit in the same NEC with someone who feels I am out to block him from ascending to the presidency. I have quit my position,” said Murathe when he resigned in January.

As a close confidant to both, I can assure you that all is well at our party.

This was a clear reference to Ruto who in 2013 struck a political deal with Uhuru’s camp which to successively ride to power despite all odds.

Murathe’s exit from Jubilee sparked a storm which later morphed into a mutiny by a section of MPs allied to Ruto who accused central Kenya of plotting to betray the DP in 2022.

Murathe personally represented the President during Jubilee’s formation and his exit sparked speculations that Uhuru his men were out to build another political vehicle for the region.

Following bitter infighting, Ruto has not minced words in accusing Raila of plotting his exit from Jubilee.

“I was in ODM before and they kicked me out and they took me to court. I want to tell you here today that you cannot kick me out of ODM and then follow me to Jubilee to do the same, it is impossible,” Ruto said then.

He added: “They are claiming that they will break Jubilee, they are daydreaming. I want to categorically state that we have no space for gossip, propaganda and conmanship into our party and in our government.”

But despite the threat posed by the handshake, there is a growing anti-Ruto movement within central Kenya which appears to be well oiled to stop Ruto in 2022.

In what points to a carefully assembled machine to block the DP, the team has resorted to Sunday church services across the Mt Kenya region to build a political wave in Uhuru’s backyard.

The team christened 'Kieleweke' is led by nominated MP Maina Kamanda and Nyeri town MP Ngunjiri Wambugu and has vowed to deal with politicians attacking the handshake in what appears to be a direct reference to Ruto.

"We are opposed to people attacking the handshake yet Raila's deal with Uhuru has brought peace and tranquillity for business to thrive. Our team is focused and will not be cowed," Kamanda told the Star yesterday.

He, however, dismissed claims that Jubilee would crash before 2022.

"Jubilee party does not belong to one person. It is a national party. Those uncomfortable can walk out and form their own parties," he said.

However, in a make-or-break move, the Jubilee party plans to hold grassroots elections next year that would be critical in determining its future.

Jubilee secretary general and cabinet minister without portfolio Raphael Tuju told the Star that the ruling party is intact and had planned a series of activities in the lead up the grassroots polls in March.

Some of the activities include launching a training manual for all its members across the country as well as unveiling a training programme for them.

“Unless there is something like a legal order for an extension, we plan to do our elections before March 2020 to ensure that the same does not interfere with competitive politics in 2022,” Tuju said.

The Jubilee party was formed in the lead up to the 2017 polls after swallowing 10 other fringe parties in what the architects said was a move to end politics of ethnicity.

However, the merger would turn to be a poisonous chalice for Ruto's presidential bid if the factions and vicious infighting is anything to go by.

Party rebellions and realignments are taking the centre stage ahead of 2022. With this, political temperature is rising barely 16 months after the ...
Siasa
3 years ago

Uhuru’s increasing engagement with the opposition has not gone down well with his deputy as well.
Siasa
3 years ago