• He the government will be able  provide security more effectively. 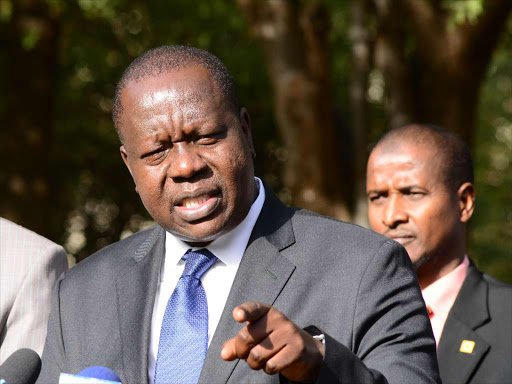 He dismissed myths about the programme, saying the unique number is aimed at improving services for Kenyans.

“Let us register for the Huduma Namba to the last man and forget those spreading lies about it,” Matiang’i said.

He spoke at Kenyatta Sports Grounds in Kisumu where he oversee registration before heading to Nyamira county on a similar mission.

The CS said registering for the number would enable the government to provide security more effectively.

He directed regional commissioners and county commissioners to work closely with governors to fast-track the registration by Kenyans.

“We want the country to move forward in terms of development and efficient service delivery. It is, therefore, very important for every citizen to get a Huduma Namba,” he said.

The NIIMIS, he said, would enable the government to be more precise in its planning, hence accelerate growth for improved living standards of the people.

He also asked elected leaders and government officials to spearhead awareness campaign about the exercise so that nobody is left out.

“We want residents in all the counties to understand why the Huduma Namba is being generated and its purpose,” Matiang’i said.

The generation of Huduma Namba would help in the fight against corruption, he said.

Suda said the government is not in the business of misleading its citizens but wants to deliver quality and sufficient services.

“We are digitising service delivery for Kenyans and, therefore, every citizen should register,” she said.

NIIMS seeks to consolidate in one digital file birth certificate, ID, KRA PIN, NSSF, NHIF, Driving License, Passport and other documents which will be the single source of truth about an individual.

Nyong’o assured of support for the national government exercise saying the new system would have a direct impact on not just service delivery but also national planning and security.

Getting your Huduma Namba - step by step guide

Before getting to the registration desk, ensure that you have your National ID with you.
News
3 years ago