• Most recent death of medical student a result of rejection 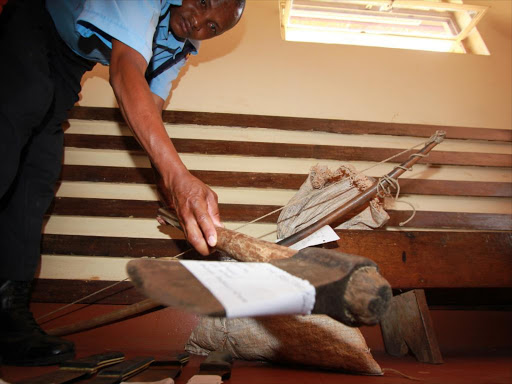 SAVE THE YOUTH FROM THEMSELVES: Crude weapons recovered from a crime scene
Image: ELKANA JACOB

Parents used to celebrate when their children scooped top grades in national examinations to join institutions of higher learning.  This is no longer the case - murder cases in such institutions are worryingly becoming the norm.

University students are getting killed every so often, raising the question; why are they the main targets of goons?

Less than a month ago, former University of Nairobi student leader OCS Rangira was shot dead at Club ‘Klabu’ 36, a market near UoN hostels. Rangira was vocal about the small market allegedly controlled by the dreaded Mungiki sect. Before his death, Rangira had promised to "deal with the gang".

His last Facebook post read: "It is unfortunate that Mungiki is terrorising Klabu 36 traders with pangas and guns taking advantage of the situation. They are demanding 10K from every trader to build a kibanda. This issue is disturbing as the police are watching it happen. Students are being harassed and others losing their phones."

The post demanded "why the police can side with people terrorising innocent Kenyans. Why should a mama mboga pay 10K to unknown people to do business? Are we managed by terrorists in the name of police? I reported this matter to Jogoo House. So where are we heading as a nation? Sad!"

Another case is the (last) September murder of Rongo University student Sharon Otieno, who was pursuing a degree in Medical Records and Information when her dream was cut short. Her body was dumped in Kodera Forest in Homa Bay county a day after she was abducted together with Nation journalist Barrack Oduor from a hotel in Rongo.

An autopsy revealed the 26-year-old girl was tortured, stabbed eight times and raped. Her seven-month-old foetus was stabbed to death.

The circumstances surrounding Sharon's death became a matter of national interest because it touched on government personnel. Her family is still waiting for justice as the case is still in court.

Clement Omolo Ogendo, a fourth-year student at Masinde Muliro University of Science and Technology was found dead under unclear circumstances in February. He was an IT student.

Student leader Evans Ondiki Oyatoh said Clement might have been killed elsewhere and his body dumped by the roadside at Lurambi along the Kakamega-Webuye Highway.

Oyatoh said they don't know the motive of his murder but investigations had been launched.

The most recent incident is that of Ivy Wangechi, who was axed to death on Tuesday as she headed to her hostel from the Moi University Teaching and Referral Hospital in Eldoret. She was a final year student at the School of Health Sciences.

Her friends described her killer, Naftali Njahi Kinuthia, as a former schoolmate. Kinuthia is said to have travelled from Thika to Eldoret to commit the crime.

A friend of Wangechi released a statement saying Ivy was murdered by a stalker who wanted to be her lover. Rodgers Abidha said on a thread on Twitter that Wangechi had known the 28-year-old Kinuthia since she was a child. “He has been pestering Ivy to be his girlfriend, since childhood, Ivy constantly refused."

She explains Wangechi's constant complaints that Kinuthia had been stalking her.

"The monster who killed her allegedly travelled all the way from Nairobi in a car with an axe and a knife. He allegedly had a friend driving the car, then ran towards Ivy and maimed her with the axe,” the thread reads.

Rongo University students to whom Sharon's murder is still fresh say it has affected most of the female students' self-esteem.

"For instance, when we are out for sporting activities or drama festival and people see the university bus, they point fingers saying 'Kwa akina Sharon (Sharon's school)' It's so sad, " Rongo student leader Mercy Wairimu says.

Women now feel that their safety is compromised and something needs to be done.

Another Rongo university student says the young generation has lost the meaning of love. "People need to understand what love is and for that matter, learn to compromise. If you ask our parents and grandparents how they perceived love and relationships, for sure you will be amazed. Secondly, most girls in the university are not content with the support they get from their parents. This is why you see them looking for sponsors."

Decode problem behind it

These cases might not end soon if action is not taken. We might put all the blame on the girls, but it is a bigger topic that needs to be discussed extensively.

"People should be sober up when dealing with matters to do with the soul. Parents should counsel their children. We need to raise good men who know that violence is not a solution to any problem," a student says.

She adds, "The increase in the level of depression and psychological issues among our youth is worrying. I urge the government, through relevant institutions and non-profit organisations of concern, to come up with programmes that will help the youths access psychiatric assistance."

University of Nairobi sociologist Ken Ouko says the regular cases of violence and fatality, now common in our universities, are a manifestation of untamed passions seeking expression.

On love, he says the most dangerous emotion is rejection.

"The mind of a young person still lacks the capacity to conjure concrete mitigation strategies that usually help adults deal with such negative emotions as rejection. This explains why for the youth, suicide or homicide are considered in the category of options deemed as viable as reconciliation or reinvention."

Ouko adds, "Another contributing factor is the normalisation of crimes of passion. Every day, the media, as well as movies and social media platforms, are awash with cases of criminality associated with passion. Young people, being such an impressionable lot, seem to have easily adapted to this resource as a normal method of resolution of passion-related misunderstandings."

Are our institutions safe?

One can never really blame universities because of the levels of free-wheeling that prevail when students are on campus. Security is hard to assure when freedoms of movement and association remain the norm at universities.