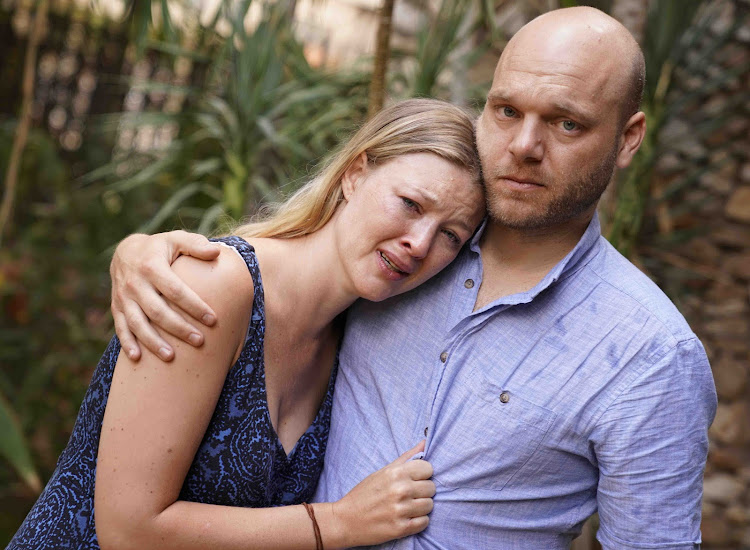 A three-year-old boy taken from his American official guardians by alleged DCI officers a week ago now appears to have been an illegal kidnap.

On the night of Friday, April 5, eleven men who said they were police officers raided a flat in Westlands and took away the child from Matt and Daisy Mazzoncini. They refused to identify themselves or to show a court order allowing them to take away the child.

Later that evening the DCI tweeted that they had conducted an operation to rescue the child from two American citizens. The tweet was taken down on Sunday at the request of the American embassy. 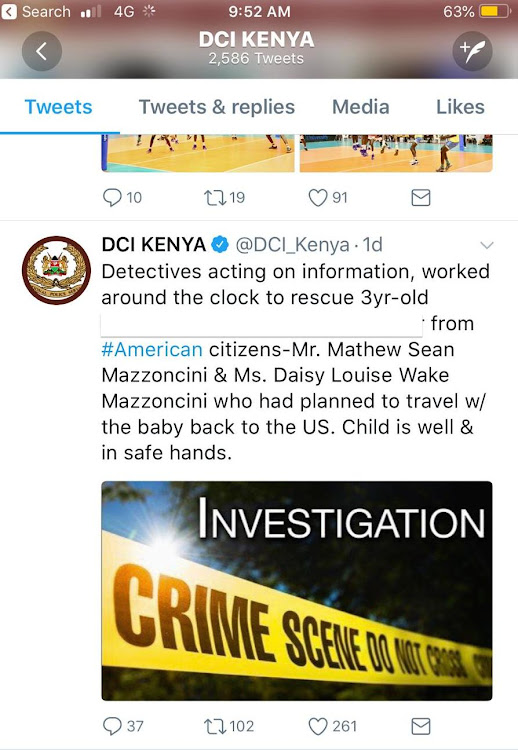 Matt is a former senior executive of Starbucks and is now Vice-President of a tech start-up in New York. Daisy is a missionary volunteer who has been in Kenya for three years.

The Mazzoncinis have now filed a writ of habeas corpus under a certificate of urgency to recover the child.

The story starts in 2016 when Daisy heard of the newborn twins left in a plastic bag outside a prayer centre in Kiambu run by Gathoni Kirima, a personal friend of hers with whom she was staying.

One twin soon died and the other remained in a very sickly state, first in Kiambu hospital and later at the Mogra Sole Breadwinner Rescue Centre orphanage in Kiambu.

Daisy started helping to care for the boy child who later had multiple procedures at Gertrude’s Hospital in Muthaiga at a cost of Sh1.5 million, paid for by Daisy and Matt.

In April 2017, the court awarded Daisy and Matt joint legal guardianship of the child after they had supplied their marriage certificate, tax records, and background clearance from the FBI.

In July 2017, the Mogra orphanage contested the guardianship order but the court granted a restraining order to stop Mogra interfering with the child.

Matt and Daisy decided to apply for adoption of the boy after the Kenya National Commission on Human Rights advised them that it was possible to get an exemption from the moratorium on adoption.

In April 2017, the court awarded Daisy and Matt joint legal guardianship of the child after they had supplied their marriage certificate, tax records, and background clearance from the FBI.

In July 2017, the Mogra orphanage contested the guardianship order but the court granted a restraining order to stop Mogra interfering with the child.

This appears to have triggered an avalanche of harassment. Daisy and Matt met CS for Labour and Social Protection, Ukur Yattani, with government officials in October 2018. In that meeting, Irene Mureithi, the CEO of the Child Welfare Society, made it clear that she thought there were enough Kenyan mothers for Kenyan children.

In lengthy follow-up interviews with CWS officials, Matt and Daisy were accused of child trafficking and fabricating medical records to make it appear that the child was sick.

In September 2018, the child had epileptic seizures for six hours continuously. He was admitted to MP Shah hospital and put into an induced coma. The doctors advised that, if possible, it would be best to take the child abroad for specialised medical treatment.

On the morning of Friday, April 5, Daisy and Matt were due in the Children's Court to apply for permission for the child to travel to the United States for medical treatment. The case was adjourned to May 14 because their lawyer Danston Omari had been bereaved. Matt and Daisy stated that they were willing to take an official from the Children's Department to the United States with them to act as chaperone to the child.

That night Daisy and Matt had just put the child to bed when 11 men, in civilian clothes without identification but claiming to be police officers, forcibly entered their flat in Westlands. When Matt demanded to see a court order, they were told, "This isn’t America, this is Kenya."

Two women were then allowed to take the boy away without any of his possessions except one stuffed toy.

Since then Daisy and Matt have been struggling to find out who took their child and why.

The child has to take anti-seizure medicine three times a day. The ‘rescue’ was reported at the Spring Valley police station but the OCS refused to accept the medicine to hand over to whoever was holding the child.

The American embassy then intervened and on Sunday ‘Mr Baraza’ from the DCI went to Gigiri to collect the medicine from the embassy. The tweet by the DCI claiming credit for the rescue and naming the child was deleted shortly afterwards.

Lawyer Danstan Omari has now filed a writ of Habeas Corpus on the Inspector of General of Police, the Child Welfare Agency and the Attorney General to produce the child under a certificate of urgency.

Omari alleges contempt of court since Matt and Daisy are the recognised legal guardians of the child and have an ongoing case in the Children's Court requesting permission for the child to travel for medical treatment.

A child rescued by the DCI last night now appears to have been an illegal kidnap from the official guardians of the child. See story https://bit.ly/2KpLQss

Kenya-based US couple wants DCI to produce child in court