• MPs concerned there is no proper policy direction to deliver proposal 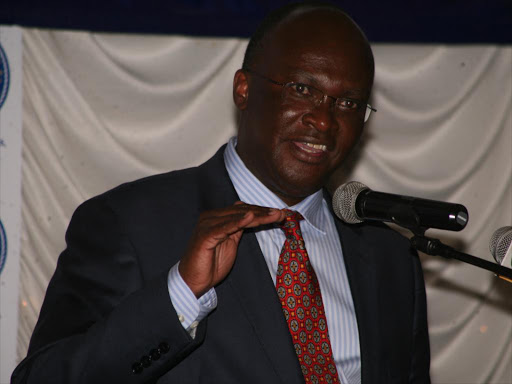 The Ministry of Transport may backtrack on the proposal for Kenya Airways to takeover JKIA following pressure from members of the public against the deal.

Cabinet Secretary James Macharia yesterday told MPs in the Transport committee that the state is now exploring other ways of consolidating its aviation assets.

“Once an agreed option is identified, we will submit the same to the Cabinet for approval as directed,” the CS told the committee led by West Pokot MP David Pkosing.

He admitted the government, at the moment, has no workable solution on how to improve KQ’s balance sheet which is currently in the red.

The CS’s response followed questions by MPs who raised concern there is no proper policy direction to deliver the proposal.

Kenya Airways is seeking to take over the management and operations of the country’s largest airport on a 30-year concession through a special purposed vehicle.

But the House committee held that the deal is still shrouded in mystery much as the government may opt out of its initial plan.

They sought answers on job guarantees for KQ employees, how long it took the Cabinet to initiate the takeover and whether the deal is an attempt to rescue the cash-strapped KQ.

Tobiko said however rosy the government may want to paint the proposal, the bottom line is that KQ remains a private entity which cannot be allowed to take over JKIA.

In his response, Macharia attempted to allay fears of job losses. The CS said the proposal is not just about improving JKIA operations but also seeks to boost Kenya’s aviation market share.

He said the Privately Initiated Investment Proposal borrowed heavily from the Ethiopian Airlines model and that nothing has been implemented so far.

Macharia said the Public Private Partnership Unit of the National Treasury is still studying the PIIP and is yet to give its report.

The CS maintained that KQ is a quasi-government entity, hence the government’s involvement in the bid to make it vibrant.

“It is ineffective to run JKIA and KQ parallel with one another. Ethiopian Airlines is doing well because its CEO runs both the airline and Bole International Airport.

“The current aviation operation model in Kenya does not facilitate the growth of both KQ and the airports, especially JKIA,” Macharia said.

The CS held that both KQ and JKIA should be treated as national assets of the people and the proposed restructuring should be viewed as a geopolitical solution and not a financial one.

He added that KQ contributes 70 per cent of JKIA activities, hence is best placed to be the concessionaire in the proposal.

But MPs asked why the government has not considered nationalising KQ first before entering into an agreement with KAA, which they argued is taking orders from the government.

“Why not pay the banks so that they shed off their shares to the government?” Odege asked.

On this, the CS said it would be a piecemeal solution to the problem, which is to turn around KQ prospects with a view to improving its market share in Africa.

The other concern is that the banks that formed the KQ Lenders 2017 Ltd (with 38.1% shareholding) are still earning interest from the loans extended to KQ.

But PS Esther Koimett, who accompanied CS Macharia to the committee hearing, said the Banking Act does not allow banks to hold shares hence the banks operate under the KQ Lenders Company.

Macharia said the loan interests in question are nominal and that the lender's arrangement has given KQ a breathing space.

He nearly ran into trouble by suggesting that the MPs were becoming supervisory in their quest for answers on the project yet the same is still work in progress.

Questions also arose on what would happen to the other airports in case KQ takes over JKIA which earns KAA 83 per cent of its annual income.

MPs, citing a leadership gap, also want answers on who is leading the process and why the government looks uncertain about the outcome of the takeover.

The issue of conflict of interest on the part of KAA chairman Isaac Awuondo – head of CBA Bank Group - also arose for the second time.

Macharia said there is no direct link between CBA and KAA management, urging that people should stop reading beyond the obvious.

The KQ proposal was birthed by a Cabinet resolution in May last year and KAA ordered to implement it.

The airports authority earlier said it was approached by KQ which cited the Cabinet resolution before the same was communicated officially by former Transport PS Paul Maringa.

PS Koimett followed up with a second letter reminding KAA to speed up the negotiations with KQ after which the authority hired a transaction adviser – MMC Africa Law, at Sh150 million to lead the negotiations.

The transport committee will be holding hearings on the KQ proposal for the next two days.

KQ can survive without taking over JKIA operations

What value—financial or otherwise—would the airline bring into this transaction?
Opinion
3 years ago
Post a comment
WATCH: The latest videos from the Star
by MOSES ODHIAMBO Journalist and Political Writer
News
10 April 2019 - 00:00
Read The E-Paper