KWS officers assure the tourists they are safe to visit the park.

• On the ground are 15 officers who include three veterinary doctor, scientists and supporting officers to ensure they curb the spread of the the outbreak., says KWS 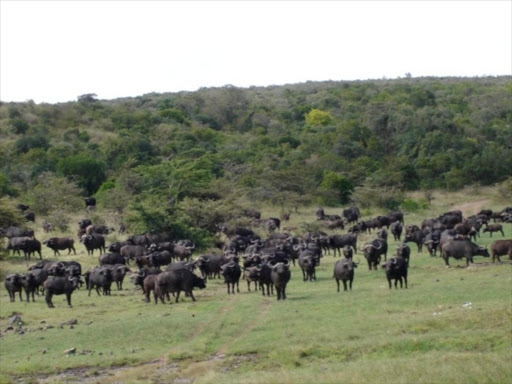 A herd of buffaloes at Laikipia Nature Conservancy. /WANJOHI GAKIO

Rhinos and giraffes are at a high risk of contracting anthrax after the disease killed 10 buffaloes at Lake Nakuru National Park, Kenya Wildlife Service said yesterday.

KWS central Rift assistant director Aggrey Maumo said white rhinos and Rhode girraffes are highly susceptible to the outbreak because they have a close contact with buffaloes.

"We have a total of 90 rhinos of which 14 are white and 66 black rhinos. We also had new births last year the team are vaccinating all species susceptible to the disease," he said.

The officers also assured the tourists that they are safe to visit the park.

"It's only when you come into direct contact with the carcasses that you'll be affected and we have a qualified team to handle the situation," he said.

Maumo however said a team of 15 officers are on the ground to monitor the situation.

"On the ground we have a team of 15 officers who include three veterinary doctors, four scientists and eight supporting officers to ensure they curb the spread of the the outbreak.  The team is conducting the aerial and ground inspection," he said.

He said the team has managed to control the situation. He added that the first case was detected on March 29.

"The first case was detected on March 29. We took the samples to the Nakuru government laboratory and the results turned positive. Since then we have had a total of seven buffaloes dying from anthrax and three from anthrax-related diseases," said the KWS regional boss.

Maumo, who was accompanied by the park's deputy senior warden Collins Ochieng' on Sunday, said they have taken preventive measures.

The KWS senior officials said the prolonged drought has triggered the spread of the outbreak.

"A few animals have died as a result of direct food effects. If the food is too dry and doesn't have enough moisture, the animals' body systems won't be able to support or sustain themselves. To contain the trough situation, we have several borehole and water boozers to water the animals," he said.

"The outbreak has seen the weak animals being the target and young buffaloes because of their low immunity," he said.

The outbreak was reported first three months ago in Nakuru, but the county government said it was in control.

"We have more buffaloes than the carrying capacity but plans are underway to relocate them to other parks," he said.

The residents said an open sewer near the park may contribute to the spread of the disease in Nakuru town and its environs.

“The fencing of the sewer around Lake Nakuru will really help in curbing this disease. It is easy for the animals to come into contact with the bacteria because they drink water from the sewer,” said Peter Yatich, a Nakuri farmer.

He said the animals also graze on fresh shoots of grass after rainfall, leading to anthrax outbreak due to the ingestion of organisms picked from contaminated soils.

In 2015, the was another outbreak of anthrax at the park.

"There was an outbreak in 2015, howeve I cannot confirm the figure of the animals that were affected," said Maumo.