• Several white rhinos have been vaccinated as a precaution

• KWS staff have gone for anti-anthrax jabs in Nakuru 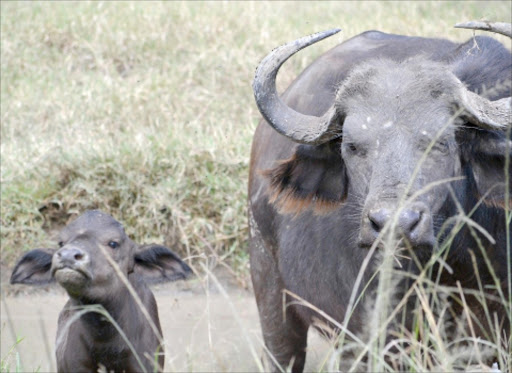 A buffalo with its calf.

Some 10 buffaloes have been confirmed dead following an anthrax breakout at Lake Nakuru National Park.

He said the KWS team moved in immediately after getting the first report.

"They've been following and surveying the situation because they seem to be a little more susceptible," he said.

"The veterinaries are on the ground trying to control the fast spread of anthrax outbreak. We are on high alert to control the disease spreading further. They have also started vaccinating the buffaloes."

Samples were taken to the regional lab in Nakuru and it was confirmed there was an anthrax outbreak.

Gathitu said protocols will be observed during disposal of the carcasses, including burying the animals, putting chemicals and managing the site.

"It's only when you come into direct contact with the carcasses that you'll be affected," Gathitu said.

He said drought has played a role and was responsible for some deaths.

"A few animals have died as a result of direct food effects. If the food is too dry and doesn't have enough moisture, the animals' body systems won't be able to support or sustain themselves," Gathitu said.

KWS staff have gone for anti-anthrax jabs in Nakuru and have been given protective gear.

Gathitu said several white rhinos have been vaccinated as a precaution because they are in close contact with the buffaloes.

The park has more than 5,000 buffaloes,which is more than the ideal capacity.

Post a comment
WATCH: The latest videos from the Star
by RITA DAMARY AND CLAIRE MUNDE
News
07 April 2019 - 10:53
Read The E-Paper