Say they will remain closed until the government engages them in talk, stops the new taxes

• Custom tax for the same container in neighbouring countries ranges between Sh1 million and Sh1.6 million. 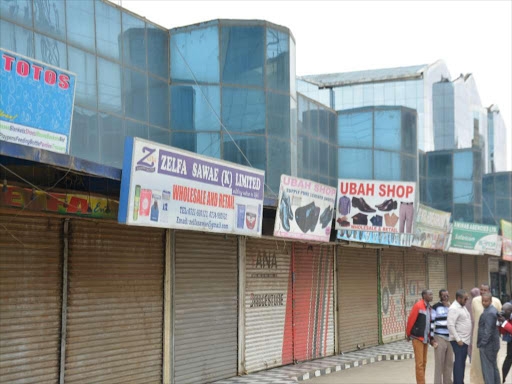 Chairman Ibrahim Hussein said they won’t reopen until the government holds talks with them.

The closure affected small-scale traders who rely on the malls for business, including transporters, hawkers, food vendors, porters and boda boda operators.

The new tax was introduced on February 20. Hussein said the changes were made without public participation.

The trader said the Kenya Revenue Authority irregularly increased tax on a 40ft container of imported clothes to Sh12 million from Sh800,000 two years ago and “this is killing our business”.

The businessman said by increasing taxation more than 500 times, the tax collector’s intention can only be to kill their business.

Hussein said Eastleigh is a shopping destination for more than nine countries, with a spiral economic effect being felt in the transport, hotel and other sectors.

Eastleigh used to import more than 5,000 containers per month and paid more than Sh1 billion in taxes. But this is changing and customers are moving to other countries.

Business in parts of the city was disrupted yesterday as traders protested against the crackdown on counterfeit products.Most shops were closed in ...
Counties
4 years ago

“Due to increase in taxes and low import volumes, the taxman is now losing millions in tax collection from the area. Eastleigh employs more than half a million indirectly and directly whose jobs are in jeopardy if businesses close down."

Custom tax for the same container in neighbouring countries ranges between Sh1 million and Sh1.6 million.

Some traders threatened to move their businesses to other countries.

“We know the essence of paying taxes is for the government to be able to offer services. But the new tax regime has pushed us to the wall and we have nothing else but to close shop and go elsewhere,” a trader said.

“This is driving us out of business because you can’t sell an item that was going for Sh250 at Sh750 and expect customers. People will go where it is cheaper.”