Fate of Huduma Namba registration to be known next week 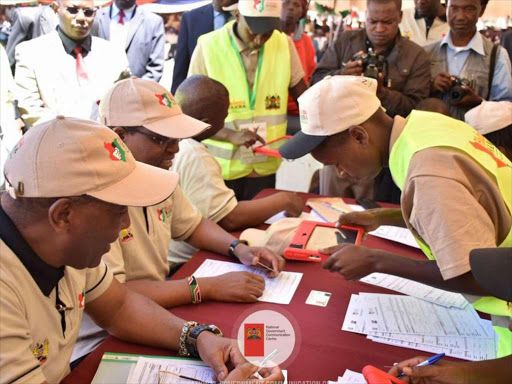 The High Court will on Monday next week decide whether the implementation of  Huduma Namba registration should continue.

The Kenya National Commission on Human Rights and Nubian Rights Forum have asked the court to suspend the collection of data from Kenyans under the National Integrated Identity Management System (NIIMS).

Judges Pauline Nyamweya, Weldon Korir and Mumbi Ngugi will rule on whether the exercise should proceed or halted until the case is heard and determined.

KNCHR, through lawyer Martha Karua, wants the bench to grant them conservatory orders pending the hearing of the case.

Karua said it is in the interest of the public for the court to stop the process because the government will not suffer any prejudice. She said Kenyans will lose more money if the registration begins and is later declared a nullity.

On mobilisation, she argued that the agents are mostly state officers who include chiefs. They will go back to their work stations if the drive is stopped, Karua said.

The government has asked the court not to issue any orders stopping the registration, saying it stands to lose millions of shillings.

The state, represented by lawyer Njoroge Regeru, said it has hired and mobilised thousands of personnel to conduct the exercise and it will be a huge setback to them if registration is stopped.

Regeru told  the judges that 31,500 biometric devices are on standby for work to begin and that contracted third parties will file lawsuits if the exercise is stopped.

He urged the court not to issue conservatory orders until the case is heard and determined. He said millions of Kenyans are not opposed to the exercise and they should be allowed to give their details to the state.

“No harm will be done to the petitioners if the exercise continues while the case is going on and if the court agrees with them, then they will stop the exercise,” the court heard.

Regeru said that the KNCHR wrote to Parliament and giving the implementation  a thumbs up.

He denied that a foreign entity will have access to the information collected by NIIMS.

The state argues that there has been public participation and Kenyans are aware of the exercise which is set to begin next week.