• Before he was elected governor, Waititu had led students in uprooting beacons at the land which was said to have been grabbed. 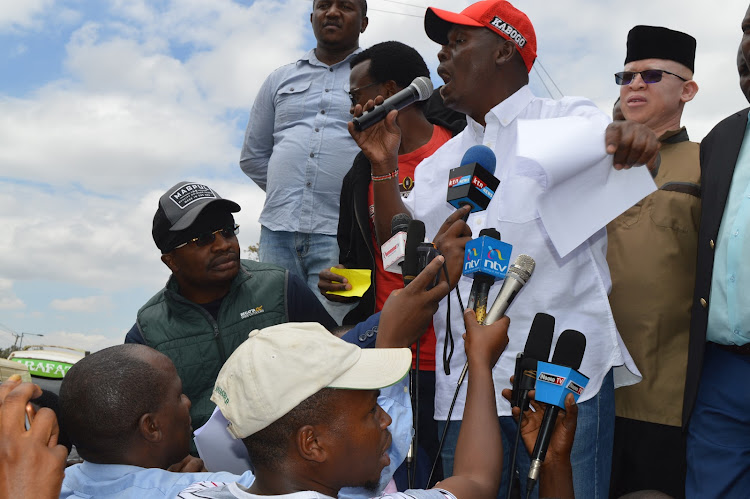 Former Kiambu governor William Kabogo speaks during a demonstration over grabbing of land belonging to Kiambu Institute of science and technology in Kiambu.
Image: STANLEY NJENGA

Former Kiambu Governor William Kabogo has given the board of Kiambu Institute of Science and Technology a seven-day ultimatum to repossess land he alleges has been stolen.

On Thursday, Kabogo and Nominated Senator Isaac Mwaura led a peaceful demonstration of Kiambu residents to protest the alleged land grabbing which he linked to Governor Ferdinand Wiatitu.

The group later presented a petition to the institute's principal.

Kabogo revealed that the institute's 200-acre land has been partitioned into 14 plots in which Waititu is a beneficiary.

"I went to the Survey of Kenya and inquired a search on KIST land and the map revealed that the land has been subdivided into 11 plots by the board of trustees of the institute. Everybody knows very well that the land is public and belongs to the Kiambu people," Kabogo said.

He said the land should be returned within seven days or else he will sue the board for grabbing public land. 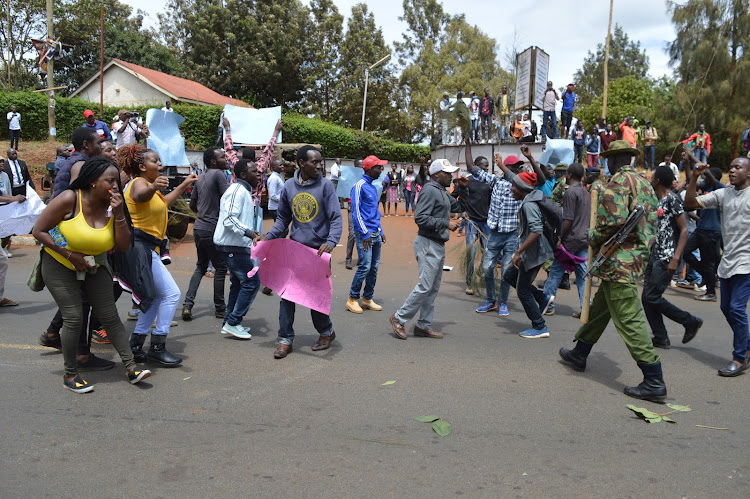 Residents with kiambu Institute of science and Technology students demonstrate outside the institute over alleged grabbing of the institution 200-acre land in Kiambu town
Image: STANLEY NJENGA

Former Kiambu Governor William Kabogo has given the board of Kiambu Institute of Science and Technology a seven-day ultimatum to repossess land he alleges has been stolen. https://goo.gl/yN9dVY

"I do not care who is in the BoT I will sue them if they do not return the land," Kabogo warned.

In the petition, Kabogo wants all subdivisions, new title numbers and deed plans of no. LR NO.81/32 (presently LR NO.81/33/35 to 45) measuring 77.4 be cancelled and the original title documents revert back to KIST.

The petition further reads that any development or otherwise of the parcel of land  LR No.81/32 be within the old indivisible title and such development be with the consent and public participation of the Kiambu people.

The petition also read that if the demands are not met within the next 14 days due process and necessary measures to protect the institution land will be taken.

Senator Mwaura said that Kiambu people have refused the land to go with individuals saying the institution has struggled to get to university level due to lack of space. 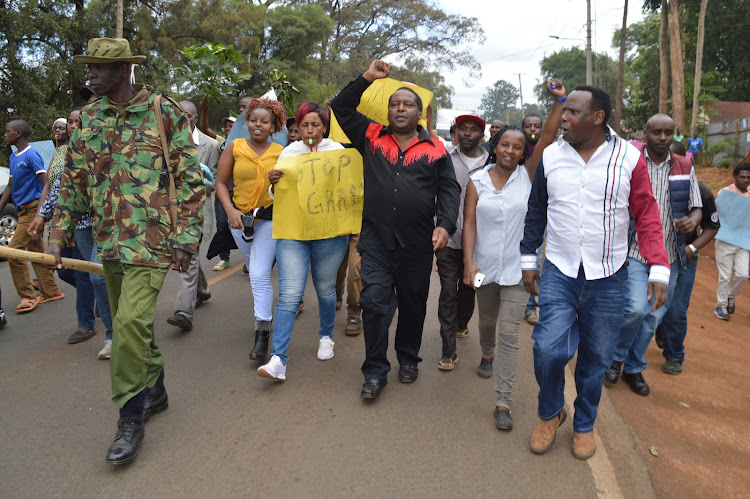 "The institute could have become a university a long time ago but a few individuals have denied our children that land. The German government wants to inject Sh2 billion to upgrade the institute but that cannot happen since the board has refused to give back the institute land," Mwaura said.

When reached for comment over the issue, Waititu told the Star through an SMS  "there is nothing like that. Those are all lies to malign my name."

Waititu is represented at the board of the institute by Kiambu County Secretary Martin Njogu.

Before he was elected governor, Waititu had led students in uprooting beacons at the land which was said to have been grabbed.

Soon after the trustees handed over one and a half acres which were meant to be built another academic wing.

However, the board were non-committal over the issue.

The Board chairman Kimani Mathu has maintained that they are only the custodian of the institute’s assets.

The chairman of the institute’s Board of Governors, Dr Kamau Kariu, has since disowned the move by trustees to hand over only one and a half acres instead of the entire land to them.

Kariu confirmed there has been a protracted battle over the control of the entire land pitting the two groups. 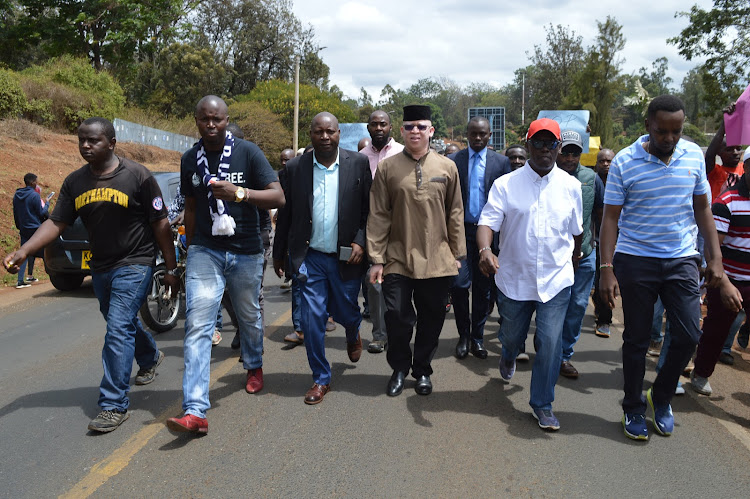 He said they have been trying to reverse the registration of the land back to the college to no avail.

The chairman said in their bid to have the land registered back in school’s name, they went to the Head of Public Service Joseph Kinyua who in turn referred them to Attorney General Paul Kihara for a legal opinion.

The AG’s legal opinion dater October 12, 2018, stated that the trustees should hand over back the land to the institute.

Kihara stipulated that according to the Technical Vocational Education and Training (TVET) Act 2013, all properties should be in the name of the institute and be managed by the Board of Governors and that there is no role of the trustees

President Uhuru Kenyatta during his visit to Kiambu  said he was aware of the wrangles pitting the two groups at the institution and they will be solved so that the government can use the money to expand the institute.

Kiambu Institute to give BoG title to 193 acres, ensuring land not misued – MCA

The Kiambu Institute of Science and Technology Board of Trustees have said they are ready to relinquish the title deed of a 200 acre land to the ...
Counties
4 years ago
Post a comment
WATCH: The latest videos from the Star
by STANLEY NJENGA Correspondent, Kiambu
News
28 March 2019 - 14:24
Read The E-Paper