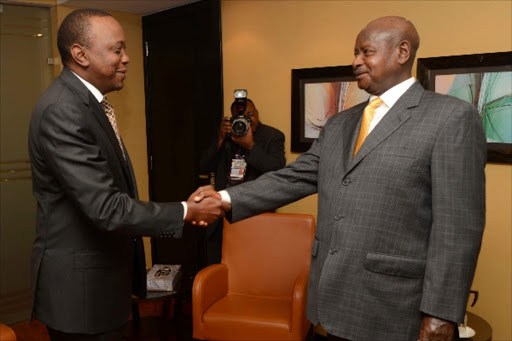 Security has been beefed up in Mombasa and its environs as President Uhuru Kenyatta prepares to hosts his Ugandan counterpart Yoweri Museveni on Wednesday.

It is the first time the two Presidents will be meeting in Mombasa.

"We are prepared to receive the head of state," Ochola said. He said details of the visit were confidential.

A source said contingents of different police units had been deployed in the coastal city's central business district, Likoni-Ferry channel and the Mombasa Port.

"We have many plain cloth officers on the ground now," the source said.

Museveni will be in Mombasa for a two-day official state visit to Kenya.

Trade talks on the agenda.
News
2 years ago

On arrival, the visiting President will be received by Uhuru at the Moi International Airport where State reception ceremonies will be conducted, State House spokesperson Kanze Dena said.

The two leaders will then proceed to State House where they will lead bilateral talks with their respective delegations before conducting a joint press briefing.

Dena said the two leaders will tour the Port of Mombasa during the visit.