SAVE SH700BN ON POLICE UNIFORMS

Tells all CSs that uniforms for their divisions must be made at NYS. no imports 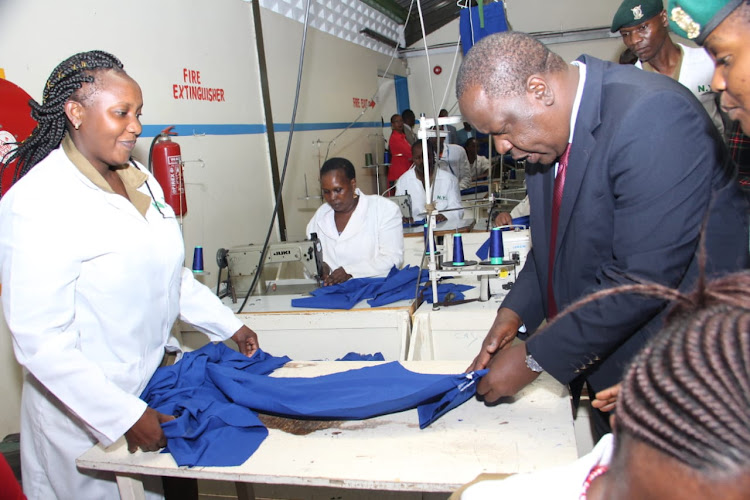 Matiang'i said that by making the new National Police Service uniforms at the NYS the government saved Sh700 million that could have been lost. He told Cabinet secretaries whose institutions make uniforms to rely on the agency.

Matiang'i spoke at the NYS Headquarters in Ruaraka. He was inspecting the progress in making the new NPS uniforms. About 250 tailors make 1,000 police uniforms day.

“I’m speaking on behalf of the Development Implementation Committee of the Cabinet. I ask my Cabinet colleagues whose institutions make uniforms to make them in Kenya, regardless of the number, because there is capacity,” he said.

“We have taken this decision. You cannot support manufacturing theoretically. We are doing it practically by spending our tax resources by buying what we can get locally," he said.

This is the way to support our farmers, grow our economy and that is what a responsible citizen of a country is expected to do, Matiang'i said.

The CS said the NYS has the capacity to make uniforms for all other uniformed services, including KDF, KSF, KWS, AP, among others.

“Those who told us all manner of senseless stories about how we can’t afford it or we don’t have material should come and see what we are seeing here. We will not go back on this,” Matiang'i said.

It is foolishness to spend our resources to import things we can get here in Kenya.
News
2 years ago

Three local fabric manufacturers have been prequalified to supply the fabric being stitched by the NYS. Maina said that is evident local industry is capable of producing what the government needs.

“It is a great day and a sad day because this capacity has been with us for a long time. These machines were installed more than 40 years ago,” she said.

“So the fact they have been idle until only recently when we chose to actualise this [making all uniforms locally] is a disgrace for us as a government," Maina said. "But I am glad we have woken up and are utilising this capacity and creating the jobs.”

“With the resources at the NYS, there is no reason why all types of uniforms cannot be produced here. We are also producing the fabric in this country. We have the capacity to produce high-quality garment that we are witnessing here today,” Kobia said.

“We are using the NYS graduates who have gone through the programme, they are trained in garment making. They are the ones doing the work from cutting, stitching, pressing and packaging, ready to dispatch. We  are happy for the job done here.”