Report shows 99% of staff are from Kikuyu community. There is also a Sh63 million variance in pending bills

• County advertised for chief officer positions but only three have been filled a year later.

• Audit shows that county attorney spent Sh10.5 million which was not clearly linked to cases. 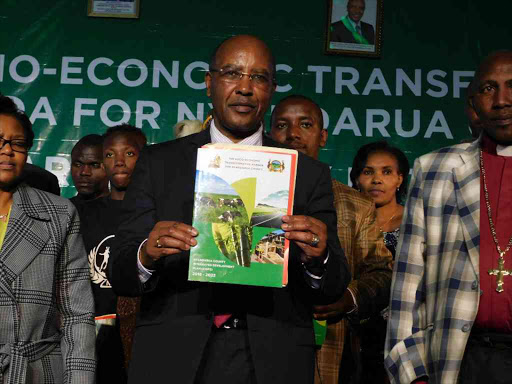 Nyandarua Governor Francis Kimemia’s administration is under scrutiny after  an audit points out irregularities in recruitment of staff.

In his 2019/2018 FY report, Auditor General Edward Ouko exposes the county for employing 99 per cent of its workers from the Kikuyu community.

The county advertised for 15 chief officer positions but only three have been filled substantively a year later. The rest are held by people in acting capacity.

Kimemia’s administration was found to be in breach of the National Cohesion and Integration Commission Act 2008, which requires that at least 30 per cent of employees should be from other ethnic communities.

The county is exposed to possible mismanagement resulting from lack of full responsibility and commitment by acting officers.

He further flagged a possible loss or no value for money in the purchase of land for a 2.63-hectare playing field at Gwa Kiongo after a review revealed that an advert calling for bidders omitted critical specifications.

Ouko also queried delayed works on a VIP terrace at Ol Kalou stadium where a contractor was paid Sh9 million through an unnumbered voucher on June 6, last year.

“Physical verification revealed that the project was executed to the floor slab level and the contractor was not on site,” the auditor said.

The contractor sought to terminate the contract citing delayed relocation of power lines, hence, the county may not get value for money under the circumstances.

A poorly graded road linking Dairy and Wiyumiririe is also under scrutiny. A firm involved in the gravelling and grading of the five-kilometre stretch was paid Sh3.4 million.

The administration also failed to label roads funded by the Roads Maintenance Levy Fund. “It was therefore difficult to differentiate the projects from roads funded by other agencies,” Ouko said.

The audit revealed that the county attorney spent Sh10.5 million which was not clearly linked to cases, and how much was charged for each.

“The county engaged the services of a law firm who raised a fee note of Sh14,750,000. The basis of the amount was not clear although a downpayment of Sh1,056,400 was made by June last year.”

The government will terminate the Sh500 million contract for Nyandarua County Headquarters because the contractor has failed to deliver, Public ...
Counties
3 years ago

The machines were unused four months after they were supplied. “Users are not deriving the intended benefits,” Ouko said.

Also under scrutiny an 18KV generator, a water boiling system and a milk cooler which have not been put to use after they were acquired for Geta and Nyamarura Farmers saccos.

In addition, one of the water boiling systems was sold by members of Nyamarura Sacco while the other is ineffective.

“In the circumstances, the farmers are not benefiting from the Sh11 million spent on the supply of the said equipment,” the report states.

The auditor further flagged a possible loss of Sh4 million paid for works on a soil testing laboratory in Nyahururu.

The contractor delivered material which has since been abandoned at the site due to the dispute pitting Nyandarua and Laikipia counties.

“At the time of the audit, the conflict had not been resolved and had delayed timely delivery of the project,” the auditor said.

Ouko also queried a Sh63 million variance in pending bills, adding that the Sh676 million declared was not unbundled as required by public sector accounting standards.

Post a comment
WATCH: The latest videos from the Star
by MOSES ODHIAMBO Journalist and Political Writer
News
26 March 2019 - 00:00
Read The E-Paper