Uhuru to Ruto: I will spare no one in graft war

Agitated Kenyatta says he will not spare even closest of allies

• President says looters of national purse are enemies of the Republic of Kenya.” 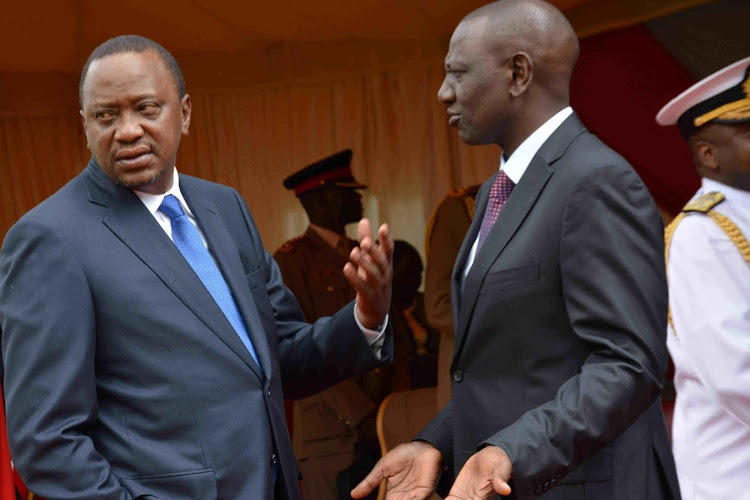 President Uhuru Kenyatta and Deputy President William Ruto at a past function.

The anti-graft axe will spare no one, including my closest political allies, President Uhuru Kenyatta vowed on Friday in a warning widely interpreted to be directed at Deputy President William Ruto and his allies.

The head of state warned the corrupt, saying he is ready to fight his “closest political ally, brother or sister” if they steal from Kenyans.

Uhuru, in a no-holds-barred address to Kenyans in Windhoek, Namibia, promised an unrelenting crackdown on the corrupt.

On Wednesday, Ruto came out in the open, claiming that he himself is the target of the politicised purge.

The truculent and contradicting positions by the country’s top two leaders were the clearest signal that the gloves are off in Jubilee, with the President and his deputy headed for an open clash.

“If you seek a position of authority, it must be on the basis of what you are able to do, to serve your fellow man… it must be to serve Kenyans but not to serve yourself, your wife and children.”

An unyielding Uhuru said that when it comes to graft, he has drawn the red line and he branded architects of corruption as “enemies of the Republic of Kenya”.

The warning salvo by the President came just a day after the DP said he is the target of the war on corruption and complained that the fight has “political outcomes in mind.” He referred indirectly to attempts to block him from succeeding Uhuru as President.

Ruto and his allies have been on the warpath, attacking the Director of Criminal Investigations George Kinoti and his Public Prosecutions counterpart Noordin Haji of being used to wage a political battle.

Yesterday the President tweeted: “I won’t be clouded by ethnicity or status in my quest to leave behind a united nation and I will continue championing for Kenya’s unity."

HIs comments were an apparent reference to his newfound love for Orange Democratic Movement leader Raila Odinga. Together they are working to heal the wounds of 2017-18 divisive elections and end animosity.

But the tweet was immediately deleted and his social media accounts temporarily suspended.

Chief of Staff and Deputy Head of Public Service Nzioka Waita tweeted after Uhuru's statement on Friday: “It seems the President’s stand on corruption has generated all manner of reactions."

It seems the President’s stand on corruption has generated all manner of reactions.

It remains unclear what triggered Waita’s remark, but State House yesterday announced it had suspended Uhuru’s social media account due to unauthorised access.

The rebellion against Uhuru has been systematic and was initially being waged only by the DP's allies, but now Ruto has joined in.

“Selective prosecution targeting predetermined individuals and projects, and steamrolled by a narrative of convenient lies and falsehood and propaganda, is not a fight against corruption. It’s impunity, it’s politics, and it’s headed in the wrong direction,” Ruto protested on March 9.

But Speaking on Friday, Uhuru boldly assured Kenyans he would not be blinded by ethnic considerations and reiterated his commitment to uniting Kenyans.

Some politicians allied to Jubilee have even suggested that the differences between the two leaders have found their way into the Cabinet.

According to Cheruiyot, it was Munya who wrote to the Ethics and Anti-Corruption Commission and State Corporation Advisory Committee, blowing the whistle after Rotich firmly declined his demands.

Munya has since been moved to the Ministry of Industrialisation.

“The truth of the matter is, at one particular time, CS Munya, who was in charge of regional development went to Cabinet Secretary Rotich who is in charge of Treasury and told him, I need Sh500 million for a project in my home county,” the Senator said on NTV on Monday.

He went on, “When the CS [Rotich] told him [Munya] that that is not how government works, he told him ‘why are you denying me only a paltry Sh500 million while you have allocated Sh63 billion to projects in your home county? If you do not give me that money, I will spoil for this project.'True to his word he is the whistleblower.”

To survive, corruption is using the ideology of negative ethnicity
Siasa
3 years ago

Munya did not respond to telephone calls for a response.

The Sh21 billion Arror and Kimwarer dams probe and the Sh4.8 billion prisons scandal are among files that are with the DPP.

This means that big heads may roll at any time.

Political analysts say the Jubilee marriage is on the rocks and the ramifications of the all-out war may be felt in a year, if not sooner.

He said the Ruto camp have self-indicted themselves by coming out bitterly to fight the government that they serve.

“The wicked will always flee even when no one is pursuing them. It’s also a self-indictment on their part. Nobody has indicated, mentioned or even purported that the Deputy President is being investigated,” Bigambo told the Star.

“Why is it that they are very much interested in the investigations going on, especially on projects in the Rift Valley? And they are not just complaining, but doing so with so much bitterness," he said.

Tell us if you're tired of Ruto, Rift MPs tell Uhuru